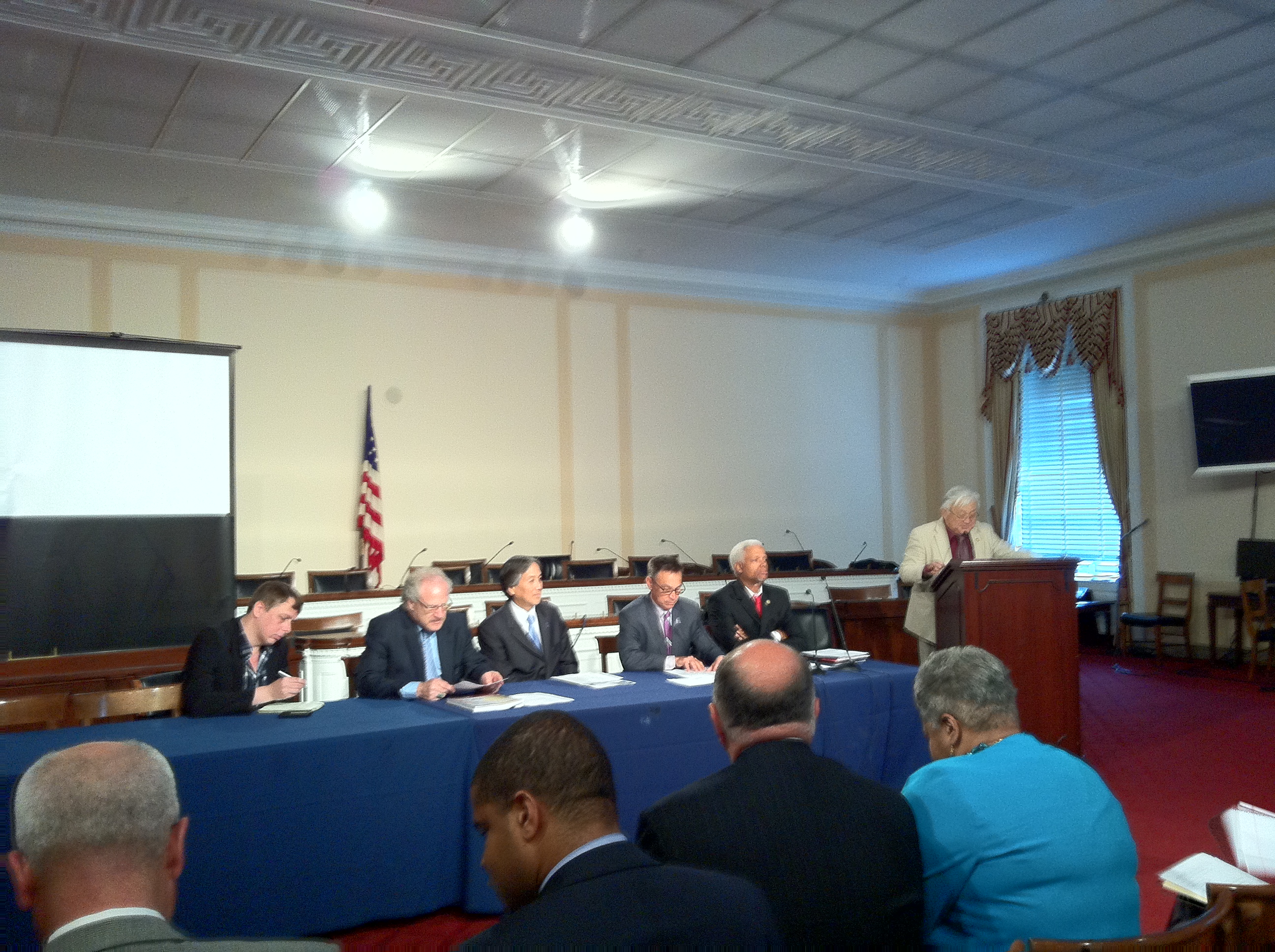 On May 17, I attended the Congressional Briefing on Chronic Hepatitis and Liver Cancer, hosted by our unwavering champions, Congressmen Michael Honda (CA) and Charlie Dent (PA).The room was filled with representatives from the advocacy community, elected officials and government agencies, and industry.

The event was scheduled to promote the first National Hepatitis Testing Day (May 19th) and to acknowledge the one-year anniversary of the HHS Action Plan for the Prevention and Treatment of Viral Hepatitis. Congressman Honda also wanted to recognize his colleagues who have joined the new Congressional Hepatitis Caucus and also attended today’s briefing:  Judy Chu (D-CA), Bill Cassidy (LA), Hank Johnson (GA), Barbara Lee (CA) and Donna Christensen(Virgin Islands). Although Congressman Dent was unable to attend the event, he sent his full support of both the issue and the event.

We now see more Congressional champions supporting the Hepatitis initiative,  and in many cases sharing their own personal stories on how this disease has impacted their lives. For example, Congressman Johnson spoke about his personal experience in combating hepatitis C and the need for more action to increase testing and access to care.

The HHS Assistant Secretary for Health Dr. Howard Koh was one of the most charismatic persons in the room, giving credit to both the Congressional Champions and the public health heroes.

It is all of these resources coming together and the strong interagency collaboration that has helped bring about the first National Hepatitis Testing Day in the U.S.. Dr. Koh also mentioned that the updated hepatitis C screening guidelines would soon be available.

Dr. John Ward (DVH/CDC)  spoke about the power of the  CDC’s “Know More Hepatitis“campaign and how interagency collaboration are positive steps toward getting the epidemic under control.  Dr. Ward also mentioned the successful Hepatitis B models in Philadelphia and Seattle, and noted that there will be more resources available in the future.

The CDC views viral hepatitis as a national crisis and Dr. Ward encouraged everyone to access the CDC website. In particular he mentioned a new CDC risk assessment tool that will help prompt testing discussions between high risk individuals and their doctor.

Mr. Bob Lubran (SAMSHSA) who oversees 1,250 opiod treatment centers across the country spoke about the challenge of treating Hepatitis C patients in these settings. He called for an extensive education program not only for patients, but for supporting health-care personnel.  There is also a significant challenge involved in managing viral hepatitis hepatitis patients and ensuring they remain on their treatment.  Mr. Lubran stated that almost 80% of the folks in these treatment centers are infected with hepatitis C.

The last speaker of the morning was Daniel Raymond, current chair of the National Viral Hepatitis Roundtable (NVHR) and representative of over 200 member organizations working at the grassroots level to promote community education and screening.  In his remarks he noted that there have been some successful programs, and that we are seeing many patients identified and getting care,but there is certainly more work to be done. We are not winning when it comes to effectively screening those at-risk groups such as pregnant women, AAPI communities, and HIV-infected MSM for hepatitis B, and subsequently vaccinating those individuals that would benefit. We are also missing an opportunity to screen for hepatitis C and potentially treating and curing identified patients. There is a solid plan in place, but we still have a long way to go. 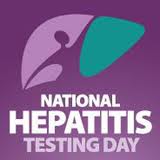 Why is hepatitis testing necessary? Hepatitis B is largely asymptomatic – until it is too late, or caught with blood donation screening, or lab work.  There are clearly defined risk factors for hepatitis B, or groups that are at greater risk, but there are also less clearly defined risks, or just bad luck. Think about this list and ask yourself if you might want to think about getting tested. If you are young, or when you were younger, was your behavior ever wild or impulsive? Are you a little older and you’re still a little impulsive, or occasionally wild? Did you ever get drunk, or do drugs – even once, or perhaps “lose a night”? Did you have unprotected sex, or do you have multiple partners? If you are monogamous, are you sure your SO is equally monogamous? Does a friend or family member possibly have a known or even an unknown infection? Maybe they know, but they aren’t telling you. Do you like traveling the world?  Outside of the U.S. there are some really wonderful places that have an extremely high HBV prevalence. Roughly 40% of Americans have tattoos, or various piercings. Did you check out the shop- not for the artistry, but for infection control practices before you got your tatt? Ever borrowed a razor or nail clippers or other personal hygiene tools from someone else? How about the nail salon? Do enjoy a good pedicure? Things happen. People are different, they have different lifestyle choices. People make mistakes. They change. Things happen.

Sometimes I take calls from people that call HBF’s consult line. In the last couple of weeks I have spoken to a few consults that do not necessarily fit the standard at-risk profile for hepatitis B. One was an older, senior citizen, who is a regular blood donor, but just recently tested positive for hepatitis B during her most recent donation. Because her blood was being regularly screened, it appears clear that she has an acute case of hepatitis B. She can’t figure out how in the world it happened. She is not having sex, nor is she an injecting drug user. She lives in a small town, and does not have any family from other parts of the world where there is a high prevalence of HBV such as Asia, sub-Saharan Africa, parts of Central America. She is dumbfounded by this diagnosis.

Another consult was concerned about his wife who had also contracted an acute case of hepatitis B. They’re also a little older and in a monogamous, married relationship. After speaking with him, we determined she likely contracted her infection through her job. She works as a cleaning woman. Although most people are not symptomatic, this woman was quite symptomatic for HBV and required close monitoring. After discussing her case with her husband, I recommended that he also be tested, though he was sure he could not be infected since he had no symptoms. He called me last week to tell that he was in fact, acutely infected. He is stunned.

I am not here to judge anyone’s apparent risks or lack of risks.  I am only here to answer questions about their hepatitis B infection. Hepatitis B is not casually transmitted, but it is one-tenacious virus that can effectively be transmitted through infected blood and body fluids.

Fortunately, there is a safe and effective 3-shot vaccine series to protect us against hepatitis B. However, the vaccine doesn’t work if you are already infected.  Remember, HBV does not discriminate. B sure. B tested. If you are do not have HBV, then give yourself lifelong protection with the hepatitis B vaccine. If you find you do have hepatitis B, talk to your doctor about further testing. Don’t forget to check out those free, confidential hepatitis screenings this weekend! 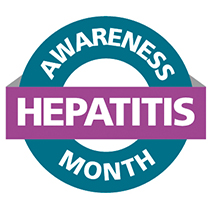 May is Hepatitis Awareness Month! What are you or your organization doing to help educate and raise HBV awareness in your community? Will you be holding viral hepatitis screening events, or other events?

The CDC has launched the “Know More Hepatitis Campaign”, which is an educational initiative striving to educate the public about viral hepatitis and encourage screening. They have designated May 19th as the first Hepatitis Testing Day. Organizations around the country will be providing viral hepatitis screening. Many will be focusing on at-risk populations. This is a great opportunity to get tested to be sure of your HBV or HCV status. Talk to the members of the organizations running the screening to learn more about these diseases, and what you can do to get involved.  Don’t forget to register your viral hepatitis screening event with the CDC, or check out screening events in your area.

The Hepatitis B Foundation and Hep B United Philadelphia have a couple of big activities planned for Hepatitis Awareness Month. On Friday, May 18th, we will be having our “B A Hero” Photo Flash mob event in Love Park in downtown Philadelphia. Everyone is excited about the event.  Some of the students have created a Hep B Rap video to get everyone psyched for the event! We also have some fabulous guests slated to make an appearance. If you’re downtown that day be sure to join us! If you’re nowhere near Philly, consider organizing your own Flash Mob! Its lots of fun and a great opportunity to raise HBV awareness with a splash!

Hep B United Philadelphia will also be offering free HBV screening at the Asian Festival on Saturday, May 19th from 12pm-3pm at the Pennsylvania Governor’s Asian Pacific Heritage Festival, at Franklin Square Park in Philly.  Folks that are screened will get a free Hepatitis B tote bag and will be entered into a raffle to win a free Kindle! Counseling will be available in Chinese, English and Korean. Educational literature will be available in Chinese Vietnamese, Korean, Lao, Khmer, and Indonesian. Look for Hep B United Philly’s tent in the health fair section, along with blood pressure, glucose and vision screening. It’s going to be a great event!

The Hepatitis B Foundation will be hosting the B Informed Parent Conference in downtown Philadelphia on Saturday, May 19th. This will be an incredible opportunity for parents of kids with hepatitis B to meet with leading pediatric experts in the field that address both medical issues and the personal challenges of parenting a child with hepatitis B. It is also a wonderful opportunity for parents to meet face-to-face with other families facing similar challenges.  Be sure to check out the detailed program agenda, and if you are a family with a child living with HBV, or know of a family living with HBV, please encourage them to attend this unique event. Pre-registration is required, though there is no charge for the event. And if that’s not enough, here are 10 reasons you need to get yourself to Philly for this event…

So let us know what you are up to for Hepatitis Awareness Month!  If you’re not already part of an organization, lend a hand and volunteer at a screening in your community. If you speak another language, volunteer your translation services, or hand out pamphlets. Make a commitment to start your own organization, or join an organization. Don’t feel like getting out there? Become an at-home HBV advocate and use social media channels such as twitter or Facebook and support viral hepatitis efforts right from home, or your phone. The opportunities are endless!