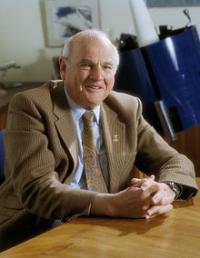 Dr. Baruch S. Blumberg had immense curiosity and energy that were hallmarks of his scientific persona. Described as a leading light in the scientific community and a great humanitarian, Dr. Blumberg identified the hepatitis B virus and created the first vaccine to prevent infection with the virus.

Dr. Blumberg dedicated most of his scientific career to the problem of hepatitis B, and was a tremendous source of inspiration for the Hepatitis B Foundation. When the Foundation was established, Dr. Blumberg enthusiastically joined as a charter member of the HBF Scientific and Medical Advisory Board. His many years of professional encouragement and personal support were invaluable to the HBF’s ongoing efforts to find a cure to complete the circle of discovery that began when he identified the virus.

In 1976, Dr. Blumberg won the Nobel Prize in Medicine for his discovery of the hepatitis B virus. He and his colleagues discovered the virus in 1967, developed the blood test that is used to detect the virus, and invented the first hepatitis B vaccine in 1969.

These outstanding accomplishments have contributed significantly towards making the world a much healthier place to live.

Dr. Blumberg served on the Scientific and Medical Advisory Board of the Hepatitis B Foundation and as its Distinguished Scholar from 1992 until his passing in 2011. He was the Senior Advisor to the President of Fox Chase Cancer Center, and Professor of Medicine and Anthropology at the University of Pennsylvania, both located in Philadelphia, Pa. In 1999, he was asked to serve as Director of the NASA Astrobiology Institute in California and subsequently was appointed Senior Advisor to the Administrator for Biology, headquartered at NASA in Washington, D.C.

A New York City native, Dr. Blumberg had a long and distinguished career with broad-ranging interests that include clinical research, epidemiology, virology, genetics and anthropology. He received his medical degree from Columbia University, and his doctoral degree from Balliol College of the University of Oxford. He joined the National Institutes of Health in 1957; moved to Fox Chase Cancer Center in 1964; and served as Master of Balliol College of the University of Oxford from 1989-1994.

Discovery of the Hepatitis B Virus

Scientific findings are often serendipitous. Such was the case for Dr. Baruch Blumberg who discovered the hepatitis B virus. He did not set out to discover the cause of hepatitis B. Rather, his intellectual curiosity and understanding of the scientific process led him to this profound discovery. In brief, the story of hepatitis B started with a search for inherited differences and ended with the discovery of a new virus.

As a medical anthropologist in the early 1950's, Dr. Blumberg was interested in the genetics of disease susceptibility. He wondered whether inherited traits could make different groups of people more or less susceptible to the same disease.

Dr. Blumberg and his team traveled the globe to collect blood samples from native populations in remote parts of the world. They planned to look for genetic differences, and then study whether these differences were associated with a disease. However, since they did not have the technology to analyze these blood samples at the genetic level, a new indirect method had to be developed; they turned their attention to hemophiliac patients.

Dr. Blumberg reasoned that hemophiliacs who had received multiple blood transfusions would have been exposed to blood serum proteins that they themselves had not inherited, but had been inherited by their donors. As a result of this exposure, the immune systems of the hemophiliac patient would produce "antibodies" against the foreign blood serum proteins, or "antigens", from the donors. Since antibodies are programmed to lock onto specific antigens, Dr. Blumberg decided to use antibodies from hemophiliac patients to test the blood samples collected around the world.

Using this new lab technique for matching antibodies with antigens, an unusual match was identified between an antibody from a New York hemophiliac and an antigen found in the blood sample of an Australian aborigine, which they called the "Australia antigen".

A series of research and clinical observations led to confirmation that the "Australia antigen" caused hepatitis B and thus, this was how the hepatitis B virus was discovered in 1967. Two years later, Dr. Blumberg and Dr. Irving Millman invented the hepatitis B vaccine, which is another fascinating story!