The Hepatitis B Foundation is a national nonprofit organization dedicated to finding a cure and improving the quality of life for those affected by hepatitis B worldwide. Our commitment includes funding focused research, promoting disease awareness, supporting immunization and treatment initiatives, and serving as the primary source of information for patients and their families, the medical and scientific community, and the general public. 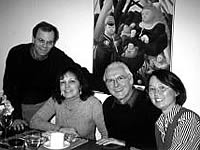 Joan and Tim Block launched the Hepatitis B Foundation in 1991, with the help of their friends Jan and Paul Witte, not long after Joan was diagnosed with the disease. Together, with the personal support of Dr. Baruch Blumberg, they made history.

In our Thirtieth Anniversary Video, Joan recounts how the Foundation got started and says, “In some ways, it’s a love story.”

Joan was a nurse at a Philadelphia hospital and Tim was a professor at Jefferson University, researching the herpes simplex virus. Then, unexpectedly, a routine health exam determined that Joan was positive for hepatitis B.

“When I was diagnosed with chronic hepatitis B, instead of panicking, he changed his whole focus of research to search for a cure for hepatitis B,” Joan recalls. “Tim went to Jan and Paul, and shared this story with them, and they immediately said, ‘We have to do something.’”

The two couples created the Hepatitis B Foundation, which was initially a virtual entity. The Foundation primarily took phone calls from people living with the disease and seeking information in those pre-internet days. There was nowhere else for people with hepatitis B to turn.

As the Foundation grew a research arm was established, the Baruch S. Blumberg Institute in 2003. The Pennsylvania Biotechnology Center (PABC) was launched to support Blumberg researchers and startup companies in the life sciences in 2006. Today PABC is one of the nation’s most successful life sciences incubators, with more than 80 member companies and about $500 million of R&D activity in recent years. The need for this kind of research and support is in such high demand that an expansion is underway at the center, which is located next to the Doylestown Airport.

In 2020, Joan and Tim Block were honored by the American Association for the Study of Liver Diseases with its inaugural Distinguished Advocacy Service Award. After that announcement, congratulatory messages poured in.

“Tim, despite his humble nature, is a scientific and social giant – a great scientist, a great teacher, a great leader and a remarkable innovator,” wrote Harvey Alter, M.D., who won the Nobel Prize in Medicine and Physiology for 2020. “With Joan as inspiration, they have evolved the Hepatitis B Foundation from a random thought to a major international entity serving innumerable carriers of hepatitis B infection and their families.”

Today, what started as a love story between two people has positively affected the lives of millions of people. The Foundation continues to grow and works diligently to provide patient care, advocacy, awareness, and most importantly, to find a cure to hepatitis B.

Today, the Hepatitis B Foundation has since grown from a grassroots effort into a professional organization with a global reach.