Meet Edwin Tan – a 29-year-old mechanical design engineer from Minneapolis, Minnesota! In 2014, Edwin was diagnosed with hepatitis B. Like many others living with hepatitis B, his diagnosis was a shock. Before his diagnosis, all he knew was that he was banned from giving blood to the Red Cross, but no one had explained the reason why. A routine blood test provided no explanations either, so his doctor decided to test for hepatitis B. The test revealed that Edwin was living with chronic hepatitis B.

After his diagnosis, Edwin decided to learn all that he could about the infection. Through his research, he found that one of the best ways to keep his liver healthy was through small lifestyle changes. Edwin began to pursue healthier life choices by increasing the amount of exercise he was getting and paying closer attention to his diet. Although he loved craft beer, he knew that drinking could be extremely dangerous to those with liver infections, so he willingly gave up all alcohol. Edwin’s dedication to a more active lifestyle led him to challenge himself by competing in local races and triathlons.

Edwin’s journey led him to realize that there is a lack of awareness about hepatitis B. He noticed that the stigmas facing those living 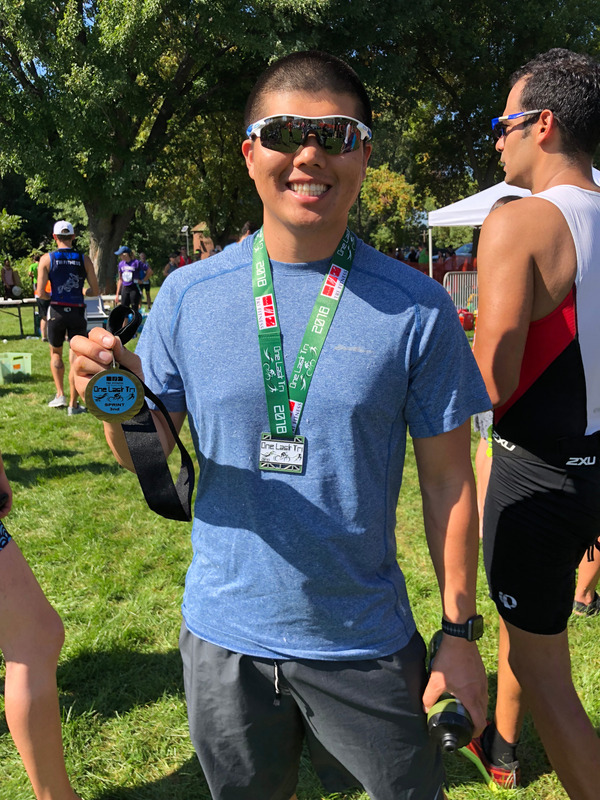 with hepatitis B could take a physical and mental toll on an individual and impact how they viewed themselves. Edwin’s observations inspired him to reach out to the Hepatitis B Foundation to raise money and awareness for hepatitis B research, patient outreach, and education. Since his passion for racing was discovered due to his commitment to health after his diagnosis, it seemed appropriate for him to use his love of sports to fundraise for hepatitis B awareness and research! He hopes that his athletic achievements help others living with hepatitis B to realize that they are more than their infection.

Now, Edwin is training for a series of six races—triathlons, a marathon and an ironman – and we’ll be with him every step of the way! You can make a gift to support Edwin’s fundraising efforts here.

“I want to be a positive example against the stigma associated with Hep B and the shame that some people may feel for having it. Completing an Ironman, which is regarded as one of the most difficult one-day athletic events, serves as a good example that we each can accomplish anything we want as long as we believe in ourselves.”

To follow updates on Edwin’s journey, you can follow the Hepatitis B Foundation or Hep B United on Facebook. Be sure to use the hashtag #Tri4ACure!

In Pennsylvania, the Hepatitis B Foundation is collaborating with various stakeholders to launch a State Viral Hepatitis Elimination Plan! Join us as we document our process from start to finish! 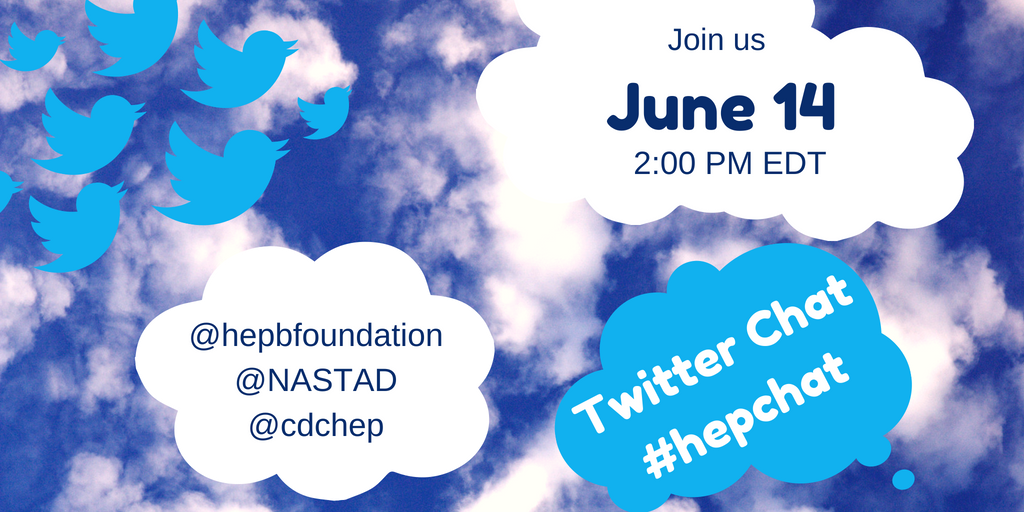 Join Hepatitis B Foundation, NASTAD and CDC’s Division of Viral Hepatitis for a Twitter #HepChat at 2 p.m. (EST) Thursday, June 14. The chat will highlight Hepatitis Awareness Month outreach events and allow hepatitis B and C partner organizations to share their successes, challenges and lessons learned from their efforts. HBF’s Kristine Alarcon and Jason Crum, this month’s featured storyteller will also be LIVE on Facebook, so if you’re not on twitter join us at hepbfoundation.

END_OF_DOCUMENT_TOKEN_TO_BE_REPLACED

Hepatitis Awareness Month is dedicated to increasing awareness of hepatitis in the United States and to encourage high risk populations to get tested. If you’re not sure how you can get involved in the hepatitis B community this month, here are some ways you can!

There are endless possibilities to celebrate this month! If you need even more ideas, CDC has a plethora of resources available dedicated to Viral Hepatitis Awareness month. You can also check out our Hepatitis Awareness Month webinar from Hep B United, NASTAD, and CDC or Hep B United and NOHep’s webinar: The NOHep Fight for Elimination!

Hepatitis B is the global pandemic no one talks about, yet one in three people worldwide has been infected. In 2013, hepatitis B and C together was the seventh-leading cause of death worldwide, with hepatitis B causing 780,000 deaths annually.

Today, 257 million people have chronic hepatitis B. Despite the availability of an effective vaccine, the number of people living with hepatitis B virus is projected to remain at the current, unacceptably high level for decades and cause 20 million deaths through 2030.

How can this happen? Viral hepatitis infection and death rates far outstrip that of ebola and zika. In fact, you have to combine the death toll from HIV and tuberculosis to find human suffering on par with what viral hepatitis causes around the world each year. END_OF_DOCUMENT_TOKEN_TO_BE_REPLACED 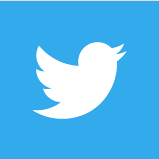 Join Hep B United, the National Viral Hepatitis Roundtable, CDC’s Division of Viral Hepatitis, and the Hepatitis B Foundation for a Twitter #HepChat Wednesday, June 15 at 2 p.m. EDT. The chat will highlight Hepatitis Awareness Month outreach events and allow hepatitis B and C partner organizations to share their successes, challenges, and lessons learned from their efforts.

END_OF_DOCUMENT_TOKEN_TO_BE_REPLACED

May is Asian-Pacific American Heritage Month – a celebration of Asians and Pacific Islanders in the United States. The month of May was selected in 1978 to mark the first major Japanese immigration to the United States (May 7, 1843), and the completion of the transcontinental railroad (May 10, 1869), built primarily by Chinese immigrants.

Like all immigrants, Asians and Pacific Islanders brought with them unique cultures, languages, and lingering health problems from their homeland, including hepatitis B.

This blood-borne infection, unknowingly passed from mother-to-child, is an infection without a cure that would impact Asian immigrants and their children for decades until a vaccine was developed.

Today, administration of the first dose of the hepatitis B vaccine along with a dose of HBIG within 12 hours of birth severs this viral legacy and protects newborns from inheriting this infection. But that is not the end of the story. There are still many Asian-Americans who remain infected, and many Asian immigrants arriving today live with hepatitis B.

May is Hepatitis Awareness month. Why do we need an annual reminder about hepatitis B? Because 65 percent of the estimated 2.2 million people in the U.S. living with hepatitis B don’t know they’re infected.

Studies show when people know their hepatitis B status, they’re more likely to get monitored regularly, get treatment, and take steps to avoid passing on the disease to partners and their children.

So why are so many Americans unaware of their hepatitis B infection? Here are five roadblocks that stop us from getting tested for hepatitis B, and what how we can do to overcome them.

We feel fine, so we assume we’re not infected. Hepatitis B rarely causes symptoms. There are very few sensory nerves around the liver, so when a viral hepatitis infection strikes, we rarely feel its effects. As a result, most of us – especially if we were infected as children or newborns – never experience any symptoms for decades. So remember, “feeling OK” is no excuse to avoid testing. END_OF_DOCUMENT_TOKEN_TO_BE_REPLACED

Eligibility: ​Anyone and everyone may participate! You do not have to be a member of Hep B United or any organization.

What to Do: ​Use Vine to create a six-second ​video (click for example) focusing on the 2016 theme “#HepBUnite: How you unite for hepatitis B.” You can create your video alone, or with a group. Your message should focus on how you are united around hepatitis B. You could highlight hepatitis B prevention activities that you participate in, or feature a key fact about hepatitis B in your video. Although not required, Hep B United encourages you to use the materials available from the Know Hepatitis B campaign!

Be Creative and Have Fun!

Selection of Winners and Prizes

Selected entries will be included in the Hep B United social media campaign! Two finalists will win $50 each!
One Grand Prize winner will win $100!

October is Liver Cancer Awareness Month. It may be a sleeper of a event when compared to other health campaigns, but for us who live with viral hepatitis, it’s an uncomfortable but critical reminder of the importance of monitoring our liver health to prevent cancer.

Viral hepatitis, especially B and C, are viral infections that can cause liver cancer  (also called hepatocellular carcinoma or HCC.) Researchers are still studying why some people are more prone to liver cancer, but we who live with chronic hepatitis B or C have a 25 to 40 percent lifetime risk of developing liver cancer. The infection, which hijacks our liver cells to manufacture more virus, causes inflammation, scarring and even cancer as the liver cells grow out of control.

The longer we are infected with viral hepatitis, the higher our risk of developing liver cancer. While liver cancer often occurs in people with cirrhosis (severe liver scarring), some of us develop cancer without cirrhosis. END_OF_DOCUMENT_TOKEN_TO_BE_REPLACED