Adding pegylated interferon to ongoing antiviral treatment produced remarkable rates of hepatitis B “e” antigen (HBeAg) loss and even hepatitis B surface antigen (HBsAg) loss, according to a study presented at the International Liver Congress held in London in April.

Eighty-three HBeAg-positive patients in China, who had been on antivirals for more than two years, had 48 weeks of interferon treatment added to their treatment regimen. A control group continued on only antivirals:

” Sequential combination therapy of (antivirals) and pegylated interferon effectively resulted in high rates of complete response and HBsAg loss in patients with prior long-term exposure to (antivirals),” researchers wrote. (Abstract 0117)

Another study exploring the benefits of sequential antiviral and interferon treatment found that HBeAg-positive patients who had been on antivirals for three years or longer also experienced high rates of HBeAg loss and development of “e” antibodies (HBeAg seroconversion) when their antivirals were replaced with pegylated interferon.

At week 48, the HBeAg seroconversion rate in the interferon-treated group was 66.67% compared to 2.5% in the antiviral group. (Abstract P1071)

A third study from India also found notable improvements when pegylated interferon was added to ongoing tenofovir treatment. Sixty patients were treated with tenofovir for 12 weeks (300 mg daily), then:

A small study, presented at the 2014 Liver Congress found that HBeAg-positive children who were treated with vitamin E (15 mg/kg/daily) for 12 months achieved higher rates of HBeAg conversion, lower viral loads and normal ALT levels than did untreated children.

An important message from the U.S. Department of Justice (DOJ) which pertains only to U.S. Residents:

If you or someone you know is dismissed or barred from a program due to chronic hepatitis B infection, report the incident to the Department of Justice, whether the complaint is against a State or local agency, a school or any private entity that serves the public.

As a friend, advocate or colleague, you have the right to file a complaint to report discriminatory behavior.  Fill in and submit the Americans with Disabilities Act (ADA) Complaint Form (www.ada.gov/t2cmpfrm.htm).

Please note: you must be a U.S. resident in order to file a complaint with the U.S. Department of Justice 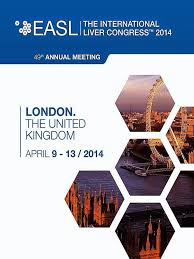 Three new studies presented today at the International Liver Congress 2014 have helped clarify the optimal use of combination therapy with peginterferon and nucleoside analogues (NUCs) to achieve the best treatment outcomes in patients with chronic hepatitis B (CHB).

In the first study , CHB patients who had failed on prior long-term exposure to one of the nucleoside analogue (NUC) antivirals demonstrated high rates of complete response and HBsAg loss when prescribed a sequential combination of peginterferon and NUC.

In the second study , adding peginterferon to the nucleoside analogue entecavir was shown to enhance response rates and viral decline in HBeAg-positive CHB patients with compensated liver-disease, was generally safe and well tolerated, and may facilitate the discontinuation of entecavir.

Finally, data from a third study suggested that adding on a NUC for six weeks to PegIFNalfa-2a does not enhance treatment response, with no increase in HBeAg seroconversion rates beyond that achieved by PegIFNα-2a alone after 24 weeks follow-up.

Just 8 cancers (ovary, myeloma, brain, stomach, esophagus, lung, liver, and pancreas) will cause nearly half of all cancer deaths in 2014.

Joining a deadly cancers “club” is not on anyone’s wish list. Yet Liver Cancer Connect, a dedicated program of the Hepatitis B Foundation, welcomed the opportunity to become a member of the Deadliest Cancers Coalition.

The Coalition was established in 2008 by the Pancreatic Cancer Action Network and other patient advocacy organizations and professional societies.

The group addresses policy issues related to the nation’s deadliest (recalcitrant) cancers. These are defined as the cancers that have 5-year relative survival rates below 50%.

While various types of cancers fit this definition, it is worth noting that nearly half of the 585,720 cancer deaths expected in 2014 will be caused by eight deadly cancers: ovary, myeloma, brain, stomach, esophagus, lung, liver, and pancreas.

Over the past 40 years, the overall 5-year relative survival rate for all cancers has increased from about 50% to 68%. This encouraging progress was mainly thanks to significant federal funding, through the National Institutes of Health (NIH) – the world’s premier supporter of biomedical research – and the National Cancer Institute (NCI). Those federal funds have been matched by investments from pharmaceutical companies, nongovernmental organizations, and states.

But some cancers have not even reached the 50% survival benchmark, let alone surpassed it. To improve survival and outcomes for people with these deadliest cancers, Congress passed the landmark 2012 Recalcitrant Cancer Research Act.  The law calls on NCI, which is a part of NIH, to develop scientific frameworks to help improve outcomes for people who have cancers with very low survival rates.

Unfortunately, continued budget cuts have led to a 23 percent reduction in NIH’s capacity to fund much-needed medical research, including research that can improve survival rates. And the squabbling over future budgets continues.

To stop further funding cuts, the members of the Deadliest Cancers Coalition are rallying their grassroots organizations to contact congressional representatives and urge them to safeguard federal funding for NIH, including NCI.

That some cancers have survival rates below 50% is deeply troubling. But the funding cuts that threaten cancer research are even more disturbing. In fact, they’re deadly.

HBF is pleased to connect our blog readers to Christine Kukka’s monthly HBV Journal Review that she writes for the HBV Advocate. The journal presents the latest in hepatitis B research, treatment, and prevention from recent academic and medical journals. This month, the following topics are explored:

Despite Antiviral Treatment, Liver Cancer Risk Persists
Researchers have hoped that treating hepatitis B patients with antivirals would reduce both their viral loads and their liver cancer risk. However, a new study that followed 1,378 treated and 1,014 untreated patients over five years found antivirals did not reduce liver cancer rates as hoped.

The study tracked new liver cancer cases among patients infected with the hepatitis B virus (HBV) (average age 47, 65% male) who had been treated primarily with entecavir (Baraclude) for their high viral loads and liver damage. They compared that group’s liver cancer occurrence to those of patients whose “inactive” HBV infection did not require treatment.

Among the treated group, 70 patients (6.2%) developed liver cancer during the study period compared to only 11 (1.1%) in the untreated group. Notwithstanding  the ability of antivirals to reduce viral load, a life-long history of HBV infection and liver damage appeared to increase cancer risk, despite the reduction in viral load later in life.

What is especially disappointing is that liver cancer developed even in treated patients who had no history of cirrhosis (severe liver scarring) which increases cancer risk. Among the antiviral-treated patients:

How well the antiviral worked in patients also determined who remained cancer-free. Of the 246 patients who failed to achieve low or undetectable viral loads as a result of treatment, 36 (18.8%) patients developed liver cancer over the five-year study.

The risk of cancer was increased overall by male gender, underlying cirrhosis and older age in the treated group. Curiously, having high viral loads (HBV DNA) at the start of treatment did not appear to increase liver cancer risk.

The key message for doctors is that liver cancer risk remains despite a dramatic reduction in viral load, researchers noted. “…Patients on (antiviral) treatment that effectively suppressed viral replication are still at higher risk of liver cancer compared with patients with inactive stage chronic hepatitis B,” they concluded in the study published in the March issue of the journal Gut.

“The inactive group may have more intact immune response to HBV and therefore may also have entered the inactive stage early in life, with a shorter period of high viral replication and active hepatitis,” they wrote.

The researchers examined vitamin D levels and liver cancer risk among 520,000 participants in the European Prospective Investigation into Cancer and Nutrition between 1992 and 2010.