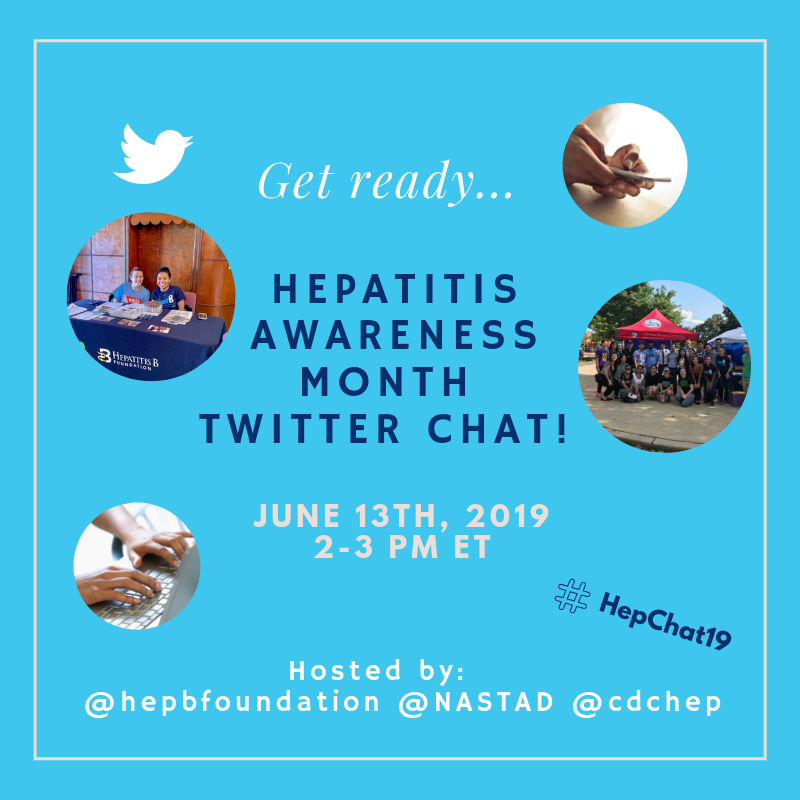 Join Hepatitis B Foundation, NASTAD and CDC’s Division of Viral Hepatitis for a Twitter HepChat at 2 p.m. (ET) Thursday, June 13th. The chat will highlight Hepatitis Awareness Month outreach events and allow partner organizations to share their successes, challenges and lessons learned from their efforts. Keep us posted with your events throughout the month with the hashtag #Hepaware19 and remember to join the Twitter Chat conversation with the hashtag #HepChat19.

END_OF_DOCUMENT_TOKEN_TO_BE_REPLACED 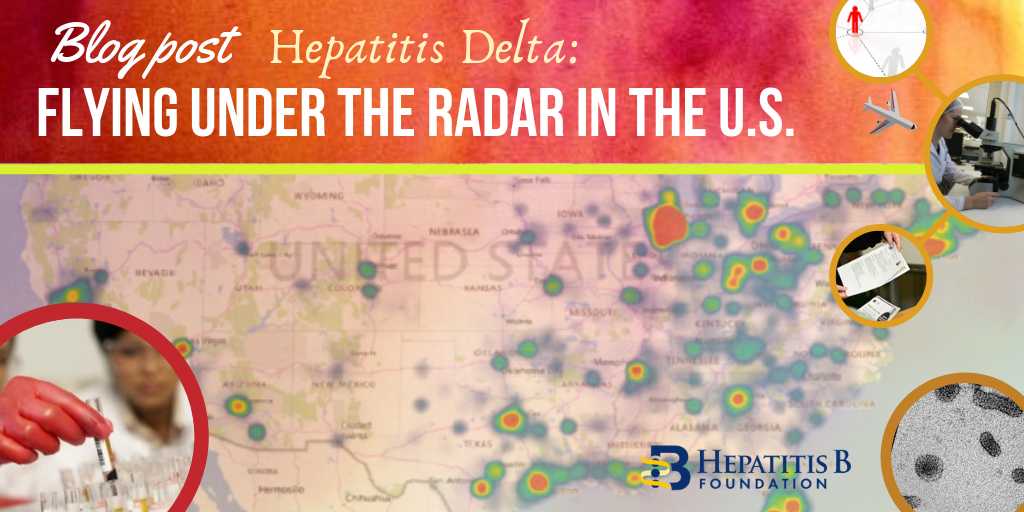 As of 2019, the Centers for Disease Control and Prevention (CDC) requires over 100 diseases, infections and conditions – including hepatitis A, B and C – to be reported by state and local health departments. Physicians who diagnose these conditions, and diagnostic laboratories, are required to report confirmed and/or suspected cases to health departments, who then notify the CDC. This requirement allows the government to monitor disease patterns and track outbreaks to contain the spread of disease and protect the public. While all other forms of viral hepatitis are federally ‘reportable’, hepatitis delta cases are not required to be reported. Hepatitis delta is the most severe form of viral hepatitis, and spreads similarly to hepatitis B; through blood and sexual fluids, making it a public health threat, particularly for the 2.2 million people who already have hepatitis B in the U.S.

Hepatitis delta can only be contracted along with hepatitis B or after someone is already infected with hepatitis B. Acute cases can cause liver damage and even liver failure, and in chronic cases, can accelerate the rate of liver disease progression, as there are no effective treatments available. Although estimated to affect 5-10% of hepatitis B patients, hepatitis delta is severely underdiagnosed, leaving the true disease burden largely unknown in the U.S. and worldwide.

In conjunction with awareness efforts, adding hepatitis delta as a reportable disease could reveal a more accurate prevalence landscape of hepatitis B and delta coinfection and allow for more effective prevention efforts. The CDC asserts that “reporting of cases of infectious diseases and related conditions has been and remains a vital step in controlling and preventing the spread of communicable diseases,1” yet hepatitis delta has still been left out of the list of nationally reportable diseases. While notifying CDC is only voluntary2, 23 states have designated hepatitis delta infections as reportable to local and state health departments, allowing for surveillance of outbreaks, particularly relevant to the current nationwide opioid crisis.

Worchester, Massachusetts, which is currently experiencing a hepatitis A outbreak, also saw one of the worst hepatitis delta outbreaks in the country in the mid 1980’s. The infection was seen among drug users and their sexual partners, sickened 135 people, and killed 15. In those infected with hepatitis B, delta coinfection was present in 54% of drug users and 33% of their sexual partners3
. Interestingly, in Massachusetts, only labs (and not clinicians) are required to report hepatitis delta cases. The reporting requirement allowed the state to be alerted of a spike in cases and respond accordingly – a luxury many other states may not have if neither labs nor clinicians are required to report in their state.

Some states are even scaling back their surveillance; in 2016, New York State removed hepatitis delta from their list of reportable diseases, citing just 21 cases in a two-year period and a health code that asserts a “providers obligation” to “report unusual manifestations of novel strains of hepatitis.”4. Although hepatitis delta is more common outside the U.S., there is evidence to suggest persistent and even growing prevalence. A 2016 prevalence map presented by Eiger BioPharmaceuticals revealed New York City as a “hot-spot” for hepatitis delta cases5. Although more recent prevalence studies are sparse, and often include only small sample sizes, several have noted increases in hepatitis delta coinfection among certain groups. One study in Baltimore, published in 2010, compared blood samples from drug users in the 1980’s to samples obtained from 2005-2006 – and found a 21% increase in hepatitis delta coinfection among people already chronically infected with hepatitis B6. A 2015 study analyzed the blood records of 2,100 hepatitis B positive veterans – nearly 4% were coinfected7. A larger study, analyzing chart records of 500 chronic hepatitis B patients in California found that 8% of patients had a delta coinfection8. Another 2018 publication utilized data from 2011-2016 from the National Health and Nutrition Examination Survey (NHANES) and estimated there to be over 350,000 Americans with past or current hepatitis delta9.

While the true burden of hepatitis delta in the U.S. is debated, one study that analyzed diagnosis codes for over 170 million people showed 10,000 coinfected patients newly diagnosed in 2016 alone4. The American Association for the Study of Liver Diseases (AASLD) recommends delta testing in high-risk groups, but countless journals and leading hepatologists have called for universal testing of hepatitis B patients for hepatitis delta9,10,11  which could reveal thousands of unknown infections. Low awareness, testing, and the lack of inclusion on the notifiable diseases list contribute to the unclear picture of prevalence in the U.S. Inconsistent reporting across states creates holes in data collection and opportunities for missed outbreaks and subsequent treatment and prevention efforts. Adding hepatitis delta to the list of reportable diseases nationally could be the key to understanding who this ‘hidden epidemic’ is affecting, and where, and allow for effective surveillance to prevent future infections.

4. The City of New York. (2016). Hepatitis D and E and other suspected infectious viral hepatitides reporting. Retrieved from http://rules.cityofnewyork.us/tags/reportable-diseases.

In 2013, an integral ruling by the United States Department of Justice (DOJ) took a major step towards ending one of the many forms of discrimination that hepatitis B patients face. The settlement made it illegal for medical schools to discriminate against students due to their hepatitis B status. Six years later, the words of

Since the court settlement in 2013, we’ve received an increasing number of patient complaints regarding medical school discrimination. Some students completed all of their classes only to be told that they couldn’t participate in their clinical experience (which is a degree requirement) due to their hepatitis B status. Other students have had their acceptance to a school revoked because they tested positive for the infection. Both situations are considered illegal under the Americans with Disabilities Act (ADA).

What You Should Know:

Sometimes, schools’ discriminatory actions are obvious but oftentimes they are not. Despite direction from the DOJ and requirements in the specified in the ADA, some institutions have not created standardized arrangements or policies for people who have hepatitis B. Other schools are not aware that turning away certain students based on a disability is illegal.

Discriminatory policies by schools may include:

As an example of a discriminatory policy, Lehigh Carbon Community College states that: “The health care agencies for clinical experiences have specific health requirements that must be met by each student. The program requires proof of personal health insurance during enrollment in the nursing program. Admission to the program may be revoked upon review of these results. (1) Positive Hepatitis B Surface Antigen (2) Titer Levels for Hep B antibody level.”

This policy does not comply with the CDC’s current recommendations and seems to be a violation of the protections afforded by the ADA. You can view this policy on page 15 of their student handbook.

A good, non-discriminatory policy should be transparent and specific. One example of this is Rutgers University. The policy is in line with, and clearly references, the CDC’s most recent guidelines and provides a clear path on how to proceed based upon each student’s infections:

What To Do If You Face Discrimination:

If you believe that a school is discriminating against you based on your hepatitis B status, there are a few important steps you can take. First, try to schedule a meeting with the person who is in charge of the program, such as a director. This will help to quicken the response to your message and help facilitate change. Be sure to bring these formal guideline documents with you to help build your case: the CDC’s updated guidelines and the official DOJ/ADA letter to schools regarding hepatitis B discrimination. You can even highlight the sections that apply to your case. Hopefully, the school will realize their mistake and make the necessary changes to their policy!

If the school refuses to acknowledge your lawful protections, you can reach out to us at info@hepb.org and we will assist you. You can also file a formal complaint with the DOJ.

This week is National Public Health Week in the United States but this year’s theme – Creating the Healthiest Nation: For Science. For Action. For Health –  can be applied globally. Over 292 million people around the world are currently living with chronic hepatitis B, yet only 10% of patients are aware of their infection. In order to create the healthiest world possible, public health needs to address all threats to the public’s health – including those we don’t see.

How can we create a healthier world by eliminating hepatitis B?

While it is important to vaccinate newborns and infants, adults must be vaccinated too. In the United States, only about 25% – 30% of adults have completed all three doses of the vaccine. Completing the vaccine series is extremely important, as it takes all three doses, according to schedule, in order to receive long-lasting protection. As the infection can be spread through unprotected sex, sharing items such as toothbrushes and razors, or unsterile needles that could be used in tattoo parlors or medical settings, increasing the vaccination rate among this population is important in order to prevent transmission.

To many patients, hepatitis B is not only a physical issue; it also has an emotional toll. From attempting to navigate the healthcare system to facing workplace discrimination, hepatitis B patients all over the world can face stress and mental distress. Cultural myths and stigma can negatively impact how infected individuals and their families interact with their communities and even each other. Addressing these issues is a major part of eliminating the infection once and for all. So, for science, for action, and for health, we must all work together to advocate for patients, protect our communities, and end hepatitis worldwide!

To hear real patients describe their struggles with hepatitis B, you can view our #justB story campaign.

Want to help raise hepatitis B awareness during National Public Health Week? Join us on social media by using the hashtags #NPHW or #NationalPublicHealthWeek on Twitter and follow along as we participate in the American Public Health Association’s twitter chat on Wednesday, April 3rd at 2 pm!