Mongolia is one of the world’s most sparsely populated countries yet is home to the highest infection rates of hepatitis B and delta coinfection worldwide1. The World Health Organization (WHO) estimates that about 5-10% of the nearly 300 million global hepatitis B patients are co-infected with hepatitis delta. Hepatitis delta is the most severe form of viral hepatitis, and greatly increases the risk of cirrhosis, scarring of the liver, and liver cancer; with seven out of 10 patients progressing within 10 years 4. In Mongolia, 70% of hepatitis B patients are coinfected with hepatitis delta, and the country is known for having the highest rates of liver cancer on the planet2,3. These statistics are startling and highlight a public health crisis for Mongolia, where most families have at least one family member affected 2.

How are people getting infected?

Historically, healthcare-related exposures are suspected to be the biggest risk for contracting hepatitis in Mongolia. Despite the 1993 national policy was set to regulate the multi-use of single-use syringes in healthcare settings, effective sterilization practices, and medical staff training, proper inspections remain an ongoing issue. Healthcare workers themselves are also at risk, with requirements for hepatitis B vaccination set by the Ministry of Health recently in 20145. Although routine infant vaccination for hepatitis B began in 19916, older populations remain at risk or are susceptible to exposures.

For a nation so widely affected by liver disease, as of 2015, skilled physicians and liver transplant experts are sparse – with only one reported team performing transplants in Ulaanbaatar, the capital city1. Fibroscan, CT scans, and liver biopsies; routine screening tools for liver disease and liver cancer, have only been introduced in recent years, and are still not routinely used for liver cancer screening as recommended by WHO7. This lack of surveillance leaves most patients to endure late diagnoses. Due to the rural landscape, where nearly 30% of the population lives below the poverty line10 and historically nomadic lifestyle accessing care is a challenge. Access to treatment for hepatitis B is additionally a challenge, and traditional medicines might be utilized. Pegylated interferon, the only current and somewhat effective treatment for hepatitis B and delta coinfection, was registered about 10 years ago in Mongolia and is still not covered by its national healthcare system, making it too expensive for most low and middle-income families8. With the help of partnerships, the government has integrated funding for palliative care for liver cancer patients, with most facilities centralized around the capital city7. With a failing insurance system and little government prioritization for prevention and treatment, many are calling on the World Health Organization (WHO), pharmaceutical companies and NGOs to step in to curb the crisis9.

Mongolia’s crisis has not been left unaddressed. Over the last 10 years, Mongolia’s government has prioritized combatting hepatitis, developing its first viral hepatitis national strategy in 2010, and focusing on prevention, affordable treatment, and public awareness programs. Admirably, coverage under the national insurance plan for antivirals began in 2016, greatly subsidizing the cost of hepatitis B treatment11. These efforts did not go unnoticed, and in 2018, WHO praised Mongolia’s efforts in moving towards the elimination of hepatitis B and C, recognizing its successes in its national program, “Whole-Liver Mongolia”. Another program, “Hepatitis Free Mongolia”, an initiative of the Flagstaff International Relief Effort (FIRE), Flagstaff Rotary Club, Rotary Club of Ulaanbaatar and the WHO, offers free hepatitis education, screening, vaccination and care for those infected. The project also trains healthcare providers and offers free exams, diagnostic services and patient counseling; a vital service for many who may not be able to access or afford these services otherwise. Since 2011, the project, along with FIRE’s Love the Liver program have tested nearly 9,000 people for hepatitis B, screened 6,000 for liver cancer and performed over 3,000 specialist exams, and, in a country of only 3 million people, has made a meaningful impact. The effort is also unofficially supported by Mongolia’s Ministry of Health, who is continually investing in efforts to curb the burden of hepatitis.

The Importance of Regular Check-Ups

Did you know that a chronic hepatitis B infection can lead to liver cancer without signs of previous damage such as cirrhosis?  Many people do not realize that chronic hepatitis B is the primary global risk factor for developing liver cancer. Cirrhosis – or scarring or the liver – is often a risk factor for liver cancer, but it is not always the case for those living with hepatitis B. This is one of the reasons why it is so important for family members and sexual partners of infected individuals to get tested as well! Lack of symptoms does not mean that damage is not occurring.

Visiting a doctor regularly is the best way to prevent liver cancer if you are living with hepatitis B. The standard recommendation for visiting your doctor is every six months however this can vary based upon the severity of your infection. The doctor will take a few blood tests, along with an ultrasound examination of the abdominal area to determine the health of the liver. Based upon these tests and other risk factors, the doctor will be able to determine if liver damage is occurring and can guide you on which steps you should take next.

If damage is detected early enough, progression to liver cancer can be prevented through highly effective treatments that stop or slow the virus from reproducing in your liver. However, it is important to note that not everyone living with hepatitis B needs treatment. Current treatments have been proven to be most effective when there are signs of active liver damage. Hepatitis B can be managed through regular monitoring by a knowledgeable doctor and lifestyle changes that can go a long way in protecting your body.

Early detection of liver cancer is extremely important. The average 5-year survival rate once diagnosed with liver cancer ranges from 10% -14%. However, with early detection and proper treatment, those numbers rise to over 50%! This significant difference is because if liver cancer is caught early, a doctor can link you to life-saving treatments including chemotherapy, surgical options, ablation techniques, intra-arterial therapies or a liver transplant. Regular monitoring by a knowledgeable doctor will hopefully identify the markers of liver cancer before it occurs, but if you are living with liver cancer, there are treatment options and resources available to you.

Educating oneself is the first step in prevention! If you have hepatitis B, be aware of the risk factors and behaviors that can increase your likelihood of liver damage and liver cancer, such as consuming alcohol and high amounts of junk food, and lack of exercise. Non-Alcoholic Fatty Liver Disease (NAFLD) can also increase your risk of cancer, so it is important to discuss NAFLD risk factors and prevention tips with your doctor. Groups such as the CDC Division of Viral Hepatitis and the American Association for the Study of Liver Diseases all provide free fact sheets, call lines, and literature by experts that can help you understand what may be occurring in your body and to make educated choices. You can also check out our Liver Cancer Connect resource for more information or for liver cancer support.

The hepatitis B vaccine is also the first anti-cancer vaccine ever created! Remember that the vaccine is typically given in a set of 3 doses. It is extremely important to take all three in order to receive lifelong protection from hepatitis B-related liver cancer. In the U.S., there is also a 2-dose vaccine available, so you can be fully protected with fewer doses! If you are worried about the cost of the birth dose for your infant or the vaccine for yourself, many countries have free health clinics that can administer it or link you to an organization that can help.

Another key to preventing liver cancer is to get tested for hepatitis B. If you have not received your vaccine and you think you fall into a high-risk group, talk to your doctor about getting tested. Because hepatitis B often has no symptoms, it is important to get screened even if you do not feel ill. An early diagnosis means that you can begin any needed treatment sooner and prevent irreversible damage from occurring. Like the vaccines, your local doctor or health clinic may be able to test you for free or reduced cost – just ask! Some local community groups also provide free hepatitis B testing, so be sure to look out for flyers and announcements about them in your community as well 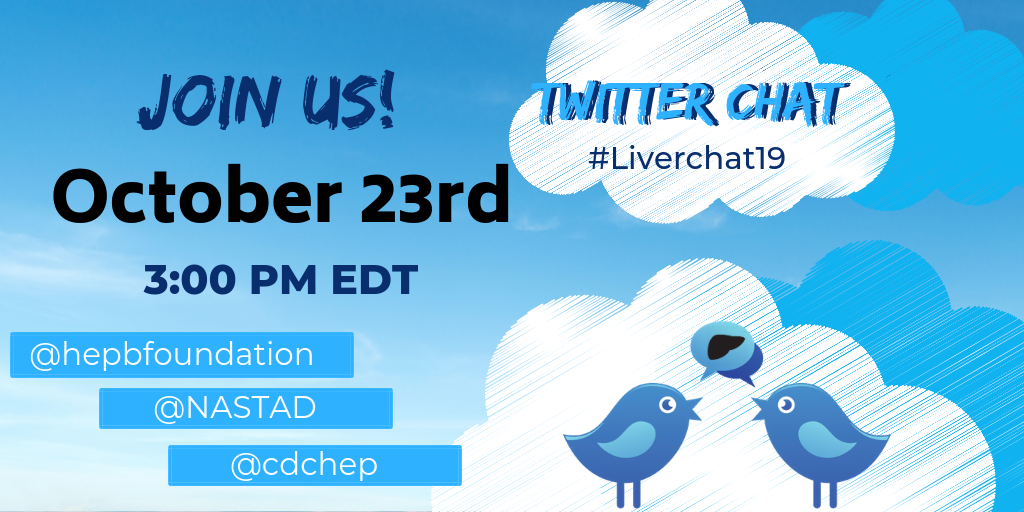 October is Liver Cancer Awareness Month. Each year in the United States, about 33,000 people get liver cancer and a large portion of liver cancer cases are caused by viral hepatitis. Viral hepatitis is preventable and when diagnosed and linked to care early, can be treated to prevent liver cancer from developing. The majority of people living with hepatitis B and hepatitis C are unaware of their status and often find out after serious damage has occurred. Liver cancer is one of the only cancers that continues to rise steadily each year. On Wednesday, October 23 at 3PM ET representatives from Hepatitis B Foundation, CDC’s Division of Viral Hepatitis, and NASTAD will co-host a twitter chat to discuss the link between liver cancer and viral hepatitis as well as the importance of engaging communities most affected, particularly patients, in our response.

A large part of our chat this year is centered upon the patient voice. The patient perspective is essential to our efforts to prevent liver cancer and improving the lives of those affected by it. Jacki Chen, one of the Hepatitis B Foundation’s #justB storytellers and Karen Hoyt, a hepatitis C patient advocate with the National Viral Hepatitis Roundtable,  will be joining this year’s twitter chat as featured guest to share their unique experiences.

Below are the questions to be discussed during the chat. How can you participate? Join the conversation that day and throughout the month with the hashtag #LiverChat19. Share any resources or strategies you have that raise awareness about the link between liver cancer and hepatitis as well as how to better engage communities most affected, particularly patients, in our work. We also encourage you to share any videos or photos you have of your work in your communities or activities during Liver Cancer Awareness Month!

· Q1: What are things everyone should know about liver cancer, and also the link between hepatitis and liver cancer?

· Q2: What can people do to prevent hepatitis, or for those living with hepatitis, what can be done to protect the liver and prevent liver cancer?

· Q3: What are the barriers that keep people from getting screened for hepatitis and liver cancer and how can they be addressed?

· Q4: Why are some communities more vulnerable to hepatitis and liver cancer, and how do we address the disparities?

· Q5: How do we engage communities most affected by hepatitis or liver cancer in our work? Why is this important?

· Q7: Who are your key partners in addressing liver cancer? Who would you like to engage more in your work? (Tag them here!)

· Q8: What is one lesson learned or piece of advice for others who want to expand their work on the link between viral hepatitis and liver cancer?

· Q9: Centering the voices of patients and liver cancer survivors is incredibly important in improving our response and ensuring their needs are being met. How do you do this in your work? How can we as a community do this better?

Co-hosts and featured partners of the chat include:

Confirmed participants and their handles include:

Just getting started with Twitter? Do you wish to join the conversation but you don’t know how? Type #LiverChat19 in the search box of the Twitter application to follow the chat, and click on “Latest”. Email michaela.jackson@hepb.org to be added to the list of confirmed participants!