On September 8th, 2019, Edwin Tan participated in one of the toughest and most exhausting triathlons in the world: the Ironman. The Ironman consists of a 2.4-mile swim, a 112-mile bicycle ride, and a marathon 26.22-mile run raced in that order. It was Edwin’s first time racing in an Ironman, and although it took him over 13 hours – on a cold, rainy day – to finish, he did not give up!

The completion of the Ironman race marks the end of Edwin’s #Tri4aCure journey, which officially began in June 2019. Since the beginning of the summer, Edwin has competed in 6 races – over 336 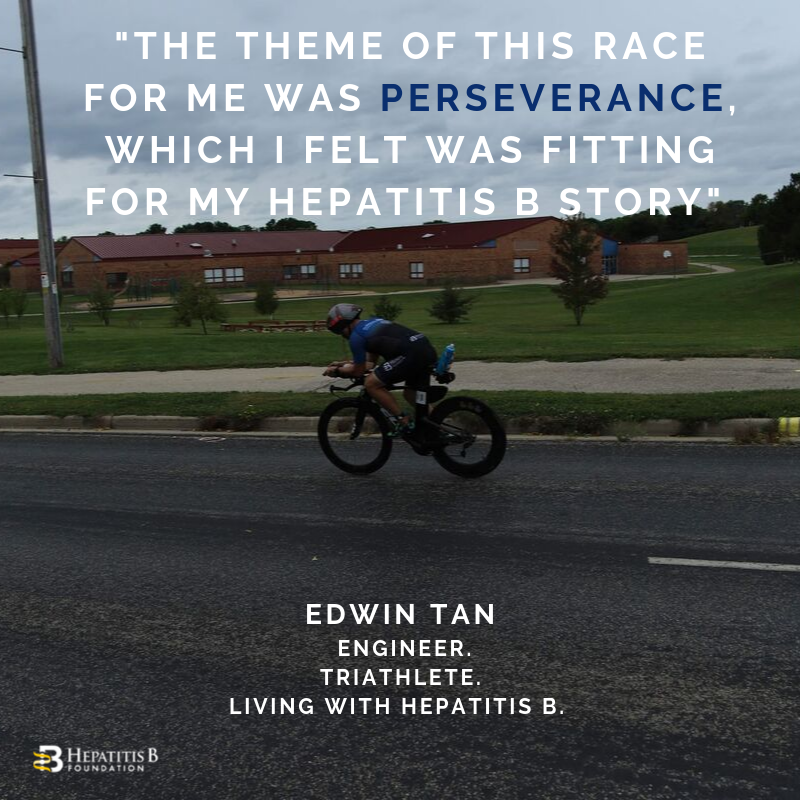 miles – to raise money and awareness for hepatitis B research, patient outreach, and education; we are extremely proud of his accomplishments!

Edwin Tan – a 29-year-old mechanical design engineer from Minneapolis, Minnesota – was diagnosed with hepatitis B in 2014. Like many others, Edwin’s diagnosis came as a surprise. After he learned his hepatitis B status, Edwin decided to learn all that he could about the infection. Through his research, he found that one of the best ways to keep his liver healthy was through small lifestyle changes. Edwin began to pursue healthier life choices by increasing the amount of exercise he was getting and paying closer attention to his diet.

Edwin’s decision to compete in an Ironman was driven by his hepatitis B journey. Researching the topic made him aware of the lack of education and extreme stigma surrounding the illness. The Ironman was a testament to the strength, endurance, & determination that those living with hepatitis B display each day.  “The theme of this race for me was perseverance, which I felt was fitting for my hepatitis B story, “ said Edwin. “Completing an Ironman, which is regarded as one of the most difficult one-day athletic events, serves as a good example that we each can accomplish anything we want as long as we believe in ourselves.”

In addition to being one of the Foundation’s supporters, Edwin is also a #justB storyteller! His video is just as inspirational and motivating as his #Tri4ACure journey. “I’m going to prove what I can achieve even while living with hepatitis B,” said Edwin in reference to competing in an Ironman.

The Hepatitis B Foundation is thrilled to have been a part of such a positive, encouraging adventure. Although the races may be over, you can still contribute to Edwin’s efforts to raise awareness and funds for a cure for hepatitis B right here.