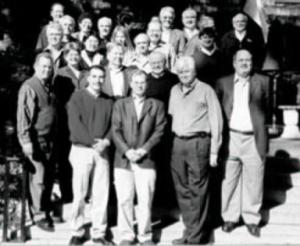 In 1995, the Hepatitis B Foundation initiated a novel concept – to host a meeting that would bring together in one room a small group of the world’s thought leaders from academe, industry and government for highly focused roundtable discussions of new and innovative therapeutic strategies for chronic hepatitis B.

Today, the prestigious Princeton Workshop serves an important role in promoting international scientific exchange and collaborations dedicated to the problem of hepatitis B. Despite the crowded scientific conference schedule, the Princeton Workshop continues to draw leaders in the field because of its small size and unique format.

“Some of the most influential leaders in the field are invited to our workshop, which has minimal structure, allowing for a vigorous exchange of ideas,” said Dr. Timothy Block, HBF co-founder and president. “It’s unique from all other scientific meetings because it encourages interactive discussion at a level that is unprecedented, and fosters new relationships and research collaborations that would not occur otherwise.”

And new research directions, Block added. For example, the list of HBV Research Priorities identified at the 2000 Princeton Workshop were part of the National Institutes of Health first 10-Year Liver Disease Action Plan, published in 2004. And the 2017 workshop focused the findings of the comprehensive Roadmap for a Cure: Priority Areas for Chronic Hepatitis B and Liver Cancer Research.

“What makes the meeting special is that it always combines basic scientists and academics with those in the pharmaceutical industry who actually make the drugs,” said W. Thomas London, M.D., senior scientist at the Fox Chase Cancer Center in Philadelphia, PA. Because there are no formal workshop proceedings published, pharmaceutical executives can freely discuss – up to a point – what they are working on.