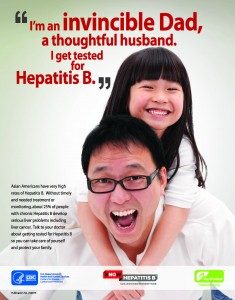 Father’s Day, June 21, is a day to celebrate the contributions men make in their children’s lives. It’s also a good day for fathers to acknowledge how valuable they are to their families and how important it is to take care of their health.

Living with chronic hepatitis B can be challenging. Here are some things dads can do to take care of themselves or family members infected with hepatitis B.

1. Get outside and soak in some sunlight and some vitamin D. People with hepatitis B who have vitamin D deficiencies have higher rates of liver damage, cirrhosis and cancer. A healthy diet provides vitamin D, but 80 percent of our vitamin D comes from 15 minutes of exposure to sunlight two to three times a week. So get outside and walk, garden, exercise and soak in some healthy sunlight.