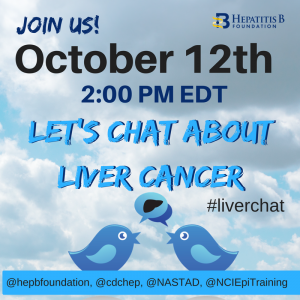 On Thursday, Oct. 12, representatives from Hepatitis B Foundation, CDC’s Division of Viral Hepatitis, and NASTAD (the National Alliance of State and Territorial Aids Directors) will co-host a twitter chat at 2 p.m. EST using the hashtag #liverchat.

Below are questions scheduled to be discussed during the chat. How can you contribute to the conversation?  Share any resources or strategies you have that raise awareness and improve liver cancer surveillance. Join the conversation with the hashtag #liverchat.

Q1: What is primary liver cancer and why is raising awareness so important?

Q2: What are the risk factors for liver cancer and why should people with viral hepatitis worry?

Q3: What are some strategies to help prevent viral hepatitis and liver cancer?

Q4: What are the barriers that keep people from getting screened for hepatitis and liver cancer and how can they be addressed?

Q5: What can people living with chronic hepatitis B and C do to protect their liver health and prevent liver cancer?

Q6: Why are some populations more vulnerable to viral hepatitis and liver cancer, and how do we address the disparities?

Q7: What can we do to raise awareness & educate vulnerable communities about viral hepatitis and its link to liver cancer?

Q8: What resources are available to learn more about viral hepatitis and liver cancer?

Co-hosts and special guests for the chat include:

Confirmed participants and their handles include: 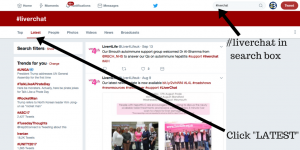 You can prepare your tweets in response to the topics listed above in advance, or you can also tweet on the fly, re-tweet, or Like a tweet from the chat.

The questions are labeled Q1, Q2, etc. so please respond/answer specific question by using A1, A2, etc. in front of your tweets. Remember to include the #liverchat hashtag, which is not case sensitive, in all of your tweets.

If you plan to participate, please contact us at info@hepb.org and we’ll add you to the list of confirmed participants. Let us know if you have any other questions about joining the chat.

It’s Kate Moraras’ job to make sure federal programs crafted in the elite halls and federal agencies of Capitol Hill are what’s really needed to eliminate hepatitis B in Asian-American, African and other at-risk communities across the country.

Simply put, her goal is to eradicate, “the most staggering health disparity facing immigrant communities.”

The people on whose behalf Moraras works are among the most vulnerable and powerless in the country. They include Asian-American and Pacific Islander (AAPI) and African immigrants who were infected at birth or by contaminated syringes or medical tools in their countries of origin.

As senior program director at the Hepatitis B Foundation and director of the Hep B United national coalition for the past three years, Moraras has worked with federal officials and dozens of hepatitis community advocates across the country to align federal policy with the need of diverse, hard-to-reach communities.

“I have always been drawn to systems-level change and I saw public health policy as a key area where there are opportunities to make an impact,” she explained. She was energized by the prospect of finding solutions that would improve healthcare at the individual and community level, and she obtained her master in public health at George Washington University.

After graduation, Moraras learned about hepatitis B when she was working on AAPI health disparities in the federal government. “Then, my uncle found out he had chronic hepatitis B when he tried to donate blood,” she recalled. Suddenly, what had been a matter of political injustice became a personal cause and she began working at the foundation.

Moraras knows federal policies don’t succeed unless they make a difference on the streets of America. “Grassroots and culturally-focused organizations are pivotal to eradicating hepatitis B because they know their communities and how they are at risk of hepatitis B,” she explained.

Preventing and treating hepatitis B in immigrant communities requires cultural nuance. Each community has its own language, cultural practices and healthcare beliefs. Many lack insurance coverage and when they finally reach a clinic or doctor’s office, the cultural disconnect creates an insurmountable barrier to learning about this complex disease.

This is why having local organizations whose staff know the culture, speak the language and can bridge the glaring healthcare gap that now stops people from getting vaccinated and treated for hepatitis B is key. “Their communities trust them, which is so critical when it comes to navigating healthcare and communicating accurate information about hepatitis B, a disease that is stigmatized in many AAPI communities. If we want to eradicate hepatitis B in the U.S., we must partner with local organizations and make sure they have adequate resources to do the job.”

Hep B United and the foundation are working to make sure federal policy helps, rather than hinders, these vital, local initiatives.

“Fortunately, we have had champions within the federal government who have taken the opportunity to lead national efforts to address hepatitis B — for example, former Assistant Secretary for Health Dr. Howard Koh who led the development of the National Viral Hepatitis Action Plan and a White House Initiative tasked with specifically focusing on AAPI communities, with a cross-cutting voice and broad reach,” she said.

“CDC now has a multilingual communications campaign, the Know Hepatitis B campaign, to encourage hepatitis B testing among AAPI communities with educational materials in a variety of Asian languages,” she added. At state and local levels, there have been city councilors and state legislators who have become champions who advocate for funding for effective community programs to increase public awareness.

“What remains challenging is the disconnect between local groups providing direct services to people and federal agencies that are working to make and implement policy at the 30,000-foot level,” she said. “For example, we still do not have a national surveillance system to monitor chronic hepatitis B cases and trends and there remains an overall lack of awareness and attention to hepatitis B at the national level. We must all continue to ask for real investment by the federal government to combat hepatitis B.

“We need to build a national hepatitis B grassroots movement, which is something that I would like to see happen through my job and Hep B United in the years ahead,” she added. “We have built a strong coalition that continues to expand every year, we have powerful advocates from local communities who have taken on leadership roles in national hepatitis advocacy and I would like to see our movement continue to grow and translate to the millions of individuals we have the potential to reach.”

Hep B United is a national coalition to address and eliminate hepatitis B, a serious liver infection that is the leading cause of liver cancer.  An estimated 2 million people in the United States are chronically infected with the hepatitis B virus.  Hep B United aims to meet this public health challenge by increasing hepatitis B awareness, testing, vaccination and treatment.

In celebration of Asian Pacific Heritage Month, Dr. moon Chen, Principal Investigator for the Asian American Network for Cancer Awareness Research and Training (AANCART) and UC Davis professor, reflects on the unnecessary cancer burden in Asian American and Pacific Islanders, including the burden of  hepatitis B related liver cancer.  END_OF_DOCUMENT_TOKEN_TO_BE_REPLACED

Mark you calendars! Join Hep B United,CDC Division of Viral Hepatitis , HBF, AAPCHO and CDC NPIN for a Twitter Chat on Tuesday, November 19th, 3pm EST to discuss the Know Hepatitis B campaign and what Hep B United, partners and coalition members are doing to raise awareness and increase hepatitis B testing and vaccination among Asian Americans and Pacific Islanders (AAPIs). Hepatitis B is the leading cause of liver cancer and a major health disparity among AAPIs who are disproportionately impacted by HBV. END_OF_DOCUMENT_TOKEN_TO_BE_REPLACED