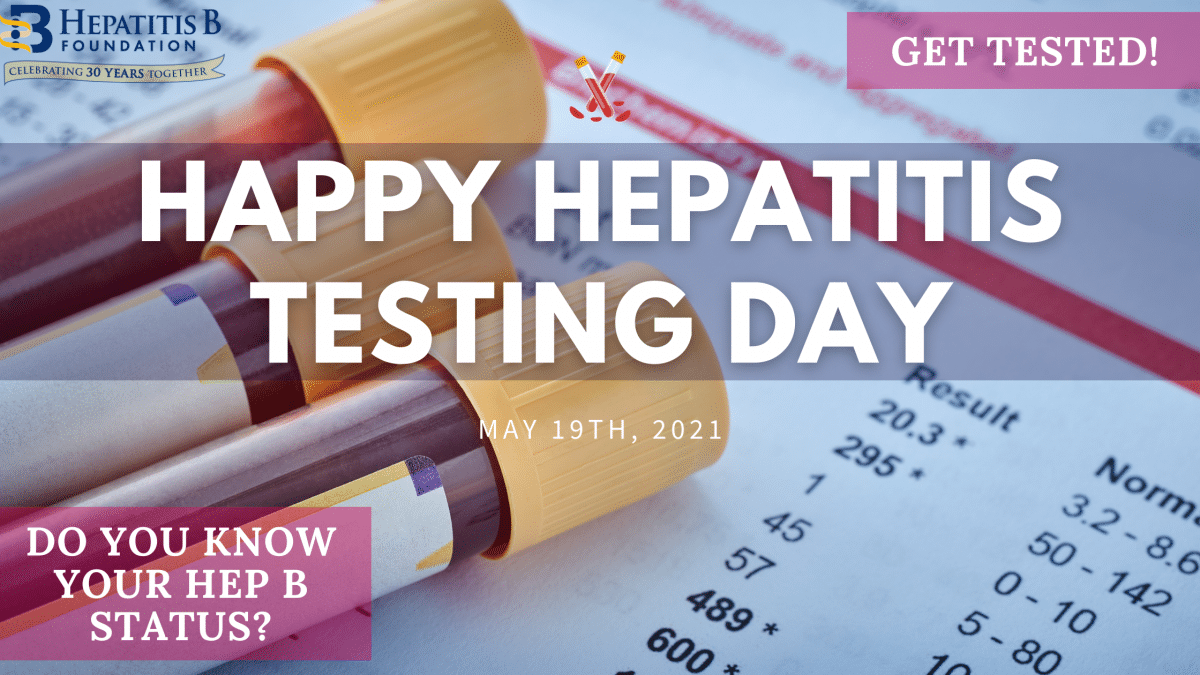 Since 2013, the United States has officially observed May 19th as Hepatitis Testing Day. With over 2.4 million people living with chronic hepatitis B in the United States and 300 million people living with it globally, it is so important to know your status! Additionally, hepatitis B is known as a “silent infection” which means that you do not know you have the disease until it has done major damage to your liver. Luckily, with hepatitis B testing, you can find out your status and take control of your health!

The hepatitis B test is a simple blood test that can be done at your doctor’s office or local care clinic. The hepatitis B blood test requires only one sample of blood and your health care provider should order the “Hepatitis B Panel,” which includes three parts. You and your health care provider will need to know all three test results in order to fully understand whether you are infected, protected or still at risk for a hepatitis B infection. Remember to ask for a copy of your hepatitis B blood test results so that you fully understand which tests are positive or negative.

Here are some next steps if you have received your test results and tested positive for hepatitis B. The first thing you should know is that you can live a long and healthy life.

Medicare insurance pays for seniors to get vaccinated against hepatitis B, but it doesn’t cover testing to find out if they’re infected and need life-saving treatment. The federal government is now poised to close this glaring healthcare gap that prevents at-risk seniors from getting screened for hepatitis B.

Last week, the Centers for Medicaid and Medicare Services proposed to cover hepatitis B testing in seniors age 65 and older who may be at risk of the liver infection.

Currently, the majority of the estimated 2 million Americans with chronic hepatitis B are over age 50, and the longer they are infected, the higher their risk of liver damage and cancer. This preventive screening saves lives and is cost-effective, because treatment with antivirals quickly and effectively reduce liver damage.

Until the Hepatitis B Foundation, Hep B United, the Association of Asian Pacific Community Health Organizations and the National Viral Hepatitis Roundtable asked the federal government to cover screening,  seniors who wanted to be tested for hepatitis B had to pay for the test themselves. Because hepatitis B is a “silent” infection, causing few symptoms until cirrhosis or cancer develop, nearly two-thirds of Americans living with hepatitis B have never been tested, identified or referred to life-saving treatment.

The highest rate of liver cancer in this country is in Vietnamese-American men, many of whom were never tested for hepatitis B. By the time they are diagnosed, it is often too late. Here’s two more examples of the high cost of this healthcare gap:

Today, the most vulnerable Americans are infected at a rate 10-times the national average, yet until now the government didn’t cover the cost of screening them. Medicare did cover testing if there were signs of liver damage from other medical tests, but in the case of late-stage hepatitis B infections, a diagnosis often comes too late for treatment.

Screening seniors for hepatitis B has a life-saving ripple effect across generations. When hepatitis B is diagnosed in a grandparent, there is an opportunity to educate, test and vaccinate their children and grandchildren who are also at risk.

Under the new guidelines, which also apply to disabled people covered by Medicare Part B, Medicare will reimburse primary care providers when they screen people at risk of hepatitis B, including:

This expanded coverage will go far to screen seniors, but gaps remain.

Under the proposed guidelines, only primary care providers can order testing, but many specialists including oncologists, rheumatologists and gastroenterologists see patients at risk for hepatitis B. The expanded coverage should include them and also pharmacists.

Additionally, both providers and the public need to know more about hepatitis B. Today, the majority of people infected with hepatitis B don’t know they’re infected. Patients often don’t share their true stories of activities that may put them at risk of hepatitis B, especially if it includes sexual abuse or injecting drug use, and doctors often don’t have the time or the skills to elicit this vital information. Along with expanded coverage should come public education to provide a common language for these difficult conversations.

Lastly, while providers are screening more Asian-Americans for hepatitis B, many of those at-risk remain undiagnosed, including first- and second-generation African immigrants.

This expanded Medicare coverage is long over-due, but we have a long way to go.

To read the proposed, expanded coverage for hepatitis B testing,  please click here.