In October 2019, the Hepatitis B Foundation had the opportunity to 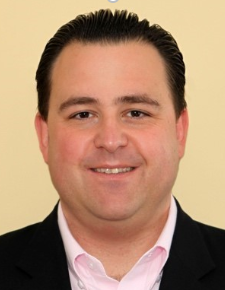 speak with Andrew Vaillant, Ph.D., Chief Scientific Officer at Replicor at the annual International HBV Meeting in Melbourne, Australia. Dr. Vaillant gave us an inside look at REP 2139 – their drug candidate developed for the treatment of chronic hepatitis B and HBV/HDV coinfection. REP 2139 is a nucleic acid polymer that removes surface antigen (HBsAg) and as part of combination therapy, has achieved functional cure for chronic HBV (sustained HBsAg loss) and sustained clearance of HDV infection from the blood in early phase II proof of concept clinical trials it has completed to date. REP 2139 is currently in phase II of clinical trials. Below is Dr. Vaillant’s response to a series of questions we posed to him.

1. Replicor’s drug candidate REP 2139 is a nucleic acid polymer (NAP) for the treatment of chronic hepatitis B. Can you explain the mechanism for this drug and how it works?

REP 2139 is a polymer built from the building blocks the body uses to store genetic material in the body (nucleic acids). These building blocks are linked together in a unique pattern to form nucleic acid polymers (or NAPs for short) and in the case of REP 2139, use only naturally occurring nucleic acids and modifications to prevent it being recognized as a foreign molecule. As a result, REP 2139 is very well tolerated and safe in clinical trials.

In HBV infection, the most abundant viral antigen in the blood is the hepatitis B surface antigen (HBsAg) which plays an important role in preventing immune control of HBV. Circulating HBsAg is almost entirely in the form of non-infectious HBV subviral particles (SVP) which are produced independently from viral replication, making this viral antigen difficult to target with approved therapies. REP 2139 naturally enters liver cells (hepatocytes) and blocks the assembly of SVP in any hepatocyte producing SVPs. This mechanism effectively blocks the replenishment of HBsAg in the blood and also reduces HBsAg inside these hepatocytes. The overall antiviral effect of REP 2139 is to allow the body to clear HBsAg in order to reduce or remove the inhibition of immune control caused by this viral antigen. 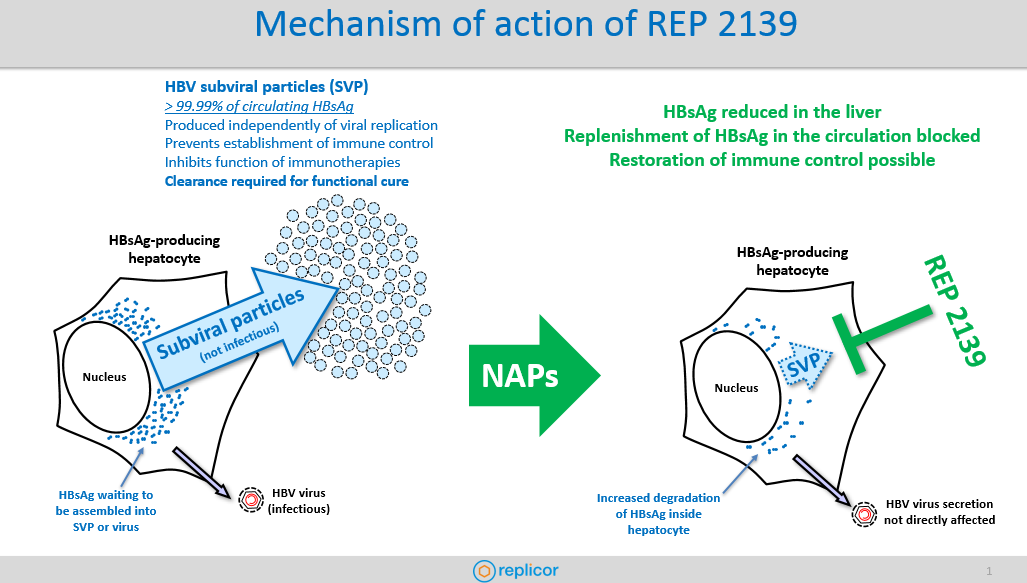 REP 2165 is a close cousin of REP 2139 being examined for potential use in future therapy with more frequent dosing to improve HBsAg response in selected cases and was proven to be as effective as REP 2139 in this study. More information about REP 2165 can be found under question 6.

3. Can you share the latest results from phase 2 trials? How is REP 2139 administered to patients, and for what duration of time? What kind of side effects can patients expect with REP 2139?

In our latest trials, side effects have been limited to mild effects from pegylated interferon (pegIFN). REP 2139 is currently given in a formulation (REP 2139-Mg) which results in little to no side effects during administration. REP 2139 is currently administered once every week for 48 weeks by intravenous infusion in combination with other antiviral agents. REP 2139-Mg is expected to be as effective with a once weekly injection under the skin (subcutaneous injection) which will be used in future trials.

4. Is REP 2139 equally effective in HBeAg positive and negative patients?

REP 2139 is effective in HBeAg positive and in HBeAg negative patients in multiple genotypes. As REP 2139 targets a host protein involved in SVP formation and not the virus or SVP directly, its antiviral effects are expected to be similar in all HBV genotypes and may also be effective in the presence of other co-infections with HBV such as HCV and HIV.

5. Can REP 2139 be safely used in patients with cirrhosis?

Another of the remarkable features of NAP based therapy is the high rate of flares in liver transaminases during therapy (occurring in almost all participants in the REP 401 study). Patients with these flares had no symptoms or any negative impact on their liver function.

Continually expanding evidence in the field tells us that during treatment of HBV, these flares are signs of elimination of HBV infection from the liver and are not accompanied by changes in liver function. These same features appear to hold true for transaminase flares during NAP therapy and, when occurring in the absence of HBsAg in the blood, are highly correlated with functional cure in our clinical trials. The ability of cirrhotic patients to tolerate these flares will be tested in future trials and we are encouraged by recent results (produced by a different group) with pegIFN in HBV / HDV co-infected patients showing that host mediated transaminase flares may also be well tolerated in cirrhotic patients.

Replicor’s latest REP 401 study is the first in the field to feature triple combination therapy: Tenofovir disoproxil fumarate (TDF), pegIFN and either REP 2139-Mg or REP 2165-Mg. REP 2165 is a close cousin of REP 2139 being examined for potential use in future therapy with more frequent dosing to improve HBsAg response in selected cases and was proven to be as effective as REP 2139 in this study. In addition to the excellent control of HBV DNA with TDF exposure, this triple combination therapy for 48 weeks led to meaningful HBsAg decline (greater than a 10-fold reduction from baseline) in 90 % of participants, HBsAg clearance to very low levels similar to HBsAg “negative” in the qualitative test used in the United States (< 0.05 IU/mL) and HBsAg seroconversion (often with very high titers of anti-HBs antibodies) in 60% of participants. After removal of all treatment (including TDF), a 48-week follow-up yielded very encouraging results: 89% had normal liver function, 56% had reduced liver inflammation, 39% had stable virologic control and an additional 39% had functional cure with HBsAg seroconversion. These results illustrate the effectiveness of combining potent HBsAg reduction with immunotherapy but also suggest that direct acting antivirals such as TDF and entecavir may also contribute to establishing functional cure in a combination setting.

7. Surface antigen loss is key to people living with chronic HBV. Do you believe REP 2139 can provide a functional cure for chronic HBV?

In an early clinical study using NAPs alone, HBsAg clearance by itself resulted in virologic control (low level infection with normal liver infection no longer requiring therapy under current guidelines ) or functional cure (complete control of HBV DNA and HBsAg) persisting after removal of all therapy only in a small proportion of patients but stable throughout a 5 year follow-up. Importantly, HBsAg clearance with REP 2139 in a subsequent study led not only to a dramatic improvement in the activity of various immunotherapies (including pegIFN) but to virologic control occurring in a larger proportion of patients after removal of therapy persisting throughout more than 2 years of follow-up. As a result of these early studies, Replicor believes that the best approach to achieving functional cure of HBV infection is to simultaneously combine potent HBsAg reduction using REP 2139 with immunotherapy to restore effective and long-lasting immune control.

Replicor believes that the combination of therapy with NUCs such as TDF and ETV, pegIFN and REP 2139-Mg will be the first available therapy to offer patients a real chance of eliminating the need for therapy and establishing functional control of their HBV infection and normalizing their liver function. Work is ongoing to start a phase II US trial in collaboration with the Aids Clinical Trials Group as soon as possible. We are also planning to assess other immunotherapies, the effectiveness of which we believe will be similarly improved with HBsAg clearance as we have demonstrated for pegIFN.

9. With regard to hepatitis delta, is there a difference in the mechanism for how it works?

REP 2139 is also potently active against HDV infection and is able to rapidly eliminate HDV RNA, normalize liver function and reverse the liver inflammation associated with HBV / HDV co-infection. The completed follow-up results from our long term follow-up study of co-infected participants treated with REP 2139 and pegIFN show complete control of HDV infection at 3.5 years follow-up in the absence of all therapy in a large proportion of patients. In many patients this control of HDV infection was associated with functional cure of HBV and in some patients with virologic control of HBV. This potent effect against HDV infection is assumed to be driven not only from the effect of REP 2139 on SVP (which also forms the envelope of the HDV virus) but on the ability of REP 2139 to interact with different forms of the hepatitis delta antigen protein essential for HDV replication and assembly. 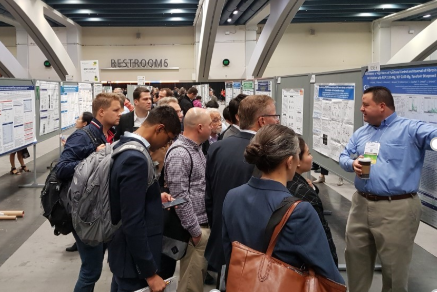 Thank you to Dr. Vaillant for taking the time to talk to us about REP 2139. The results look promising! We look forward to learning more from continuing and new trials with REP 2139, used alone and in combination with antivirals and immune modulators. We know the hepatitis B virus is challenging, but those living with chronic HBV look forward to a day when there are therapies resulting in a durable loss of surface antigen and sustained viral suppression in a reasonable, finite amount of time.