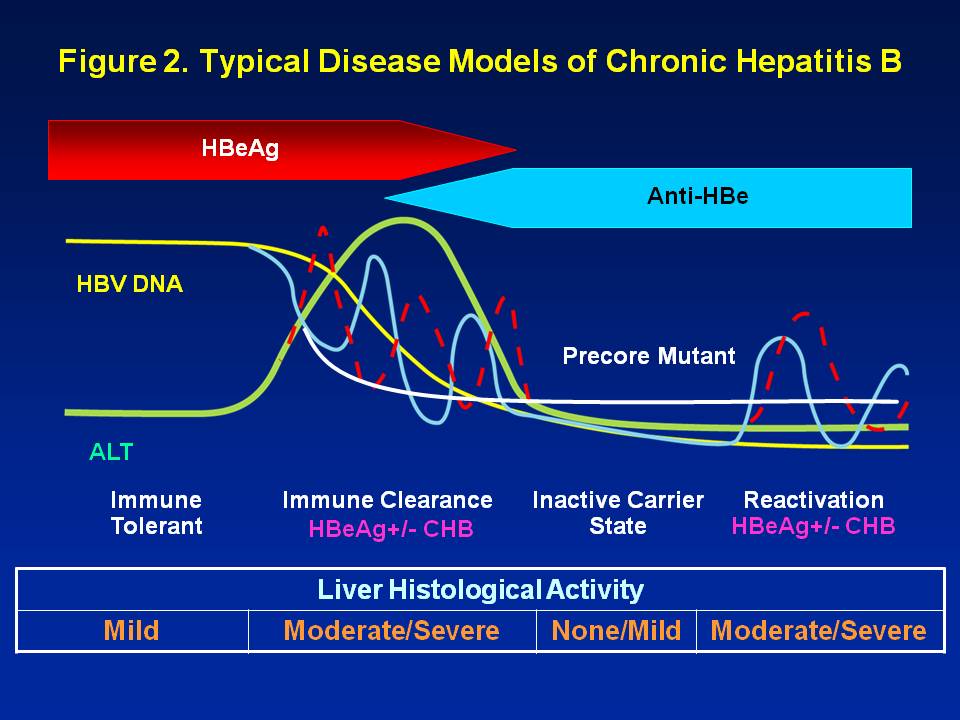 In the last chronic hepatitis B stages blog, we looked at the immune tolerant phase.

At some point the immune system recognizes the hepatitis B virus and the chronically infected person will enter a phase referred to as the immune clearance ( also know as the immune active, or immune reactive HBeAg–positive phase). During this phase blood work will show that you are HBeAg positive, with lower levels of HBV DNA when compared to the immune tolerant stage, and increased ALT levels. (Remember, it is not at all unusual for kids to have viral loads in the millions or even billions.) During this “clearance” phase the immune system is actively attacking infected liver cells. This is both good and bad. On the good side, if the immune system is able to “beat” the virus, the person will go through HBeAg seroconversion and lose the HBeAg antigen. This means that HBeAg will go from positive to negative and the HBeAb antibody, or anti-HBe will go from negative to positive.  This results in significant decrease in the hepatitis B virus level, often to an undetectable level, and normalization of ALT and other liver function labs. Successful HBe serconversion moves you into the inactive HBsAg carrier phase.

When the immune system activates and starts attacking infected liver cells, it not only kills the virus, but also the host liver-cells. You probably won’t feel any of this, but your ALT (SGPT) and AST (SGOT) lab values will be elevated. These enzymes are released when there is inflammation caused by liver cells that are injured or killed.  Your doctor may see a mild, moderate or high levels of ALT elevation reflecting damage done in the liver. Ultimately the problem is how much liver damage occurs during the process of HBeAg seroconversion?

It is possible a person will quickly and spontaneously move into and out of the immune clearance phase, and with a limited amount of liver damage. However, some people may cycle for years with intermittent flares, which are evidenced by ALT elevations which may be as high as 10 times above the upper limits of normal (normal is 30 IU/mL for men and 19 IU/mL for women) when clearance is attempted.  While the immune system attacks infected liver cells, viral replication will decrease and ALT levels will elevate as infected liver cells die in the battle.  If successful, the immune system response will result in HBe seroconversion –  losing HBeAg, gaining the HBe antibody, decline of the virus to very low or undetectable levels, and normalization of ALT/AST levels.

Unfortunately that might not be enough, and the immune system may not be able to put up a big enough fight permitting HBe seroconversion. Evidence of this are ALT levels that go back down, and viral replication that goes back up. (Note the above diagram.) This cycling up and down over time will be reflected in lab work if a liver specialist monitors you regularly. If you are not having your ALT levels regularly monitored (every few months), then you may miss these cycles of intermittent flares over time. It is during these flares that liver damage occurs, and you will likely be completely unaware, unless you have lab work done during a flare, or you wait until there are symptoms and significant liver damage.

It is during the immune clearance phase when treatment is typically recommended. It is true that a chronically infected person will eventually serconvert HBe spontaneously – without treatment, but most liver specialists choose to treat in order to prevent years of flares and damage to the liver.

Next time, next stage … Inactive Carrier, Reversion, or HBe Mutation?