Have you noticed fewer patients living with chronic HBV seem to get liver biopsies to assess liver damage?  Here is a perspective on the Liver Biopsy, known as the “gold standard”, by William Carey, MD, Division of Gastroenterology and Hepatology of the Cleveland Clinic.

Liver biopsy is referred to as the “gold standard” in assessing both the activity and degree of fibrosis in many chronic liver diseases including hepatitis B. It is not likely to retain this lofty status much longer. Liver biopsy has several important drawbacks. Among them are cost, risk for complications, need for additional health care resources, patient and physician aversion to the procedure, inadequate specimen size and the lack of specific findings.

Liver biopsy adds between $2,500 to $3,500 to the cost of an evaluation (even higher for transvenous liver biopsy). Approximately 20% of patients will experience significant pain following percutaneous liver biopsy. More severe complications include pneumothorax, major bleeding, inadvertent biopsy of the kidney or colon, and perforation of the gallbladder. Death, most often due to uncontrolled bleeding, may occur in up to 1 in 1,000 biopsies. Underappreciated is the risk of no-representative sampling, either because of the small size of biopsy specimen or patchy distribution of fibrosis.

Noninvasive measures to assess hepatic fibrosis have been around for a generation and are increasingly used as a substitute for liver biopsy. The 2014 medley of noninvasive estimates of hepatic fibrosis includes FibroTest/FibroSure, APRI, FIB-4, other serum based test combinations, and elastography (either ultrasound- or MRI-based). Noninvasive tests have potential both for determination of current liver damage and for monitoring disease progression. They can be done at a fraction of the cost of a liver biopsy. Salkic and colleagues have reported the results of an exquisitely performed meta-analysis of peer reviewed published reports and confirmed the value of FibroTest/FibroSure in hepatitis B — mainly in excluding the diagnosis of cirrhosis. The findings of this review are restricted to hepatitis B, but others have shown similar findings in hepatitis C and alcoholic liver disease.

While there is growing consensus that noninvasive markers provide valuable information, allowing the clinician to make important decisions about treatment, screening for varices and hepatocellular carcinoma, it is essential to understand limitations of FibroTest, including distortions in results in individuals with Gilbert’s syndrome and in those with hemolysis. This study reiterates the relative insensitivity of noninvasive tests in discriminating between lesser degrees of fibrosis (F0, F1, and F2).

Data are accumulating to suggest noninvasive markers (combining a noninvasive test plus ultrasound-based elastrography, for example) are powerful tools in assessing natural history of individuals with many chronic liver diseases including hepatitis B, providing indices of disease activity, progression and fibrosis regression after treatment. Convenience, lower cost, and ease of repeated measurements over time favor widespread acceptance of these tools in clinical practice. 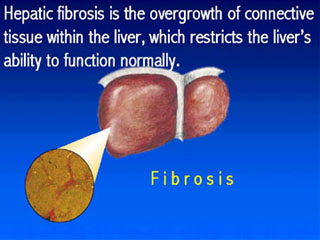 Below is a publication from “Healio Hepatology, February 21, 2013 – HbsAg Levels Linked with Fibrosis in HBeAg-Positive Patients” , showing the correlation between HBsAg and HBV DNV virus levels and the risk of moderate to severe fibrosis in HBeAg positive patients.

Patients with hepatitis B who tested positive for hepatitis B e antigen were at increased risk for moderate-to-severe fibrosis with lower levels of hepatitis B surface antigen in a recent study.

Modeling analysis established an HBsAg cutoff of 3.85 log IU/mL-1 with a theoretical sensitivity of 100%, specificity of 86% and NPV of 100% for predicting moderate-to-severe fibrosis among HBeAg-positive patients with genotypes B or C. Investigators noted that the small cohort size used to establish this cutoff requires further validation to be clinically useful.

“To our knowledge, the current study is only the second to associate an HBsAg cutoff with the prediction of fibrosis severity in CHB patients,” the researchers wrote. “It will be of considerable interest to see whether the serum HBsAg and HBV DNA levels in the patients infected with different genotypes are significantly different from the mean values of the overall HBeAg-positive group, and if they will require the development of genotype-specific cutoffs, or whether a single cutoff is applicable to all HBV genotypes.”

Disclosure: See the study for a full list of relevant disclosures.