Hepatitis B Foundation mourns Bill Mason, an accomplished scientist whose discovery led to current treatments for hepatitis B

Dr. Mason was long-time scientific and medical advisor to the Foundation.

An emeritus professor at Fox Chase Cancer Center in Philadelphia, Dr. Mason and his colleague Jesse Summers, PhD, discovered how the hepatitis B virus replicates, which is a process called reverse transcriptase that is the basis of the action of all oral hepatitis B drugs today. For that discovery and related work, the Hepatitis B Foundation awarded Dr. Mason and Dr. Summers, a University of New Mexico professor, the Baruch S. Blumberg Prize for Research in 1999.

Dr. Mason also was a longtime scientific advisor to the Hepatitis B Foundation and its research arm, the Baruch S. Blumberg Institute.

“Bill Mason was one of the pillars of the hepatitis B research community and a genuine thought leader,” Timothy Block, PhD, co-founder, board executive chair and former president of the Hepatitis B Foundation and its Blumberg Institute. “Bill had high scientific standards, and was truly gracious and generous.”

Dr. Mason was among the organizers of the annual International HBV Meeting, which currently is being held in Paris. At the meeting today (Sept. 21), fellow scientists celebrated his legacy with a discussion about his work and life. 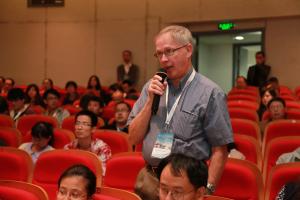 Bill Mason asking questions of a speaker at the 2013 International HBV Meeting in Shanghai.

Stephan Urban, PhD, head of Translational Virology Heidelberg University Hospital and globally prominent researcher in hepatitis B and D, said Dr. Mason was a leader in their field.

“His contributions were tremendous, not only his discovery of new hepadnaviruses but how they can be eliminated from the liver of their hosts,” Dr. Urban said. “Bill Mason was a very critical thinker and challenged his colleagues. He was highly respected and when he stood up to a question at our conferences, people listened.”

Jesse Summers, PhD, who was Dr. Mason's research partner said, "Bill generated much affection among his colleagues by contributing so positively, yet selflessly, to knowledge in basic research, which can be a very competitive endeavor. No doubt Bill must have had this attitude in everything he did."

Dr. Mason earned a bachelor’s in mathematics in 1965 at Stevens Institute of Technology and a doctorate in biophysics from the University of Chicago in 1971. He conducted research as a Postdoctoral Fellow at the University of Southern California during 1971-1973. You can read more about Dr. Mason here.