The first in-person fundraiser for the Doylestown organization, after two years of exclusively virtual fundraisers, was well-attended. 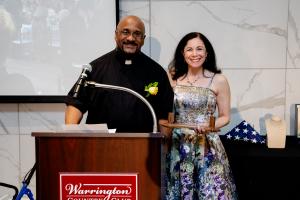 Doylestown, Pa., April 27, 2022 – The Hepatitis B Foundation Gala, an annual fundraiser and celebration of the nonprofit’s people and achievements, was held on April 1 at The Warrington, a popular event venue in Warrington, Pa. Gilead Sciences Inc. was the presenting sponsor of this record-breaking event.

Not only did nearly 280 people attend the Gala, they and the event’s sponsors contributed more than $227,000, which is far greater than the amount raised at any previous Gala. Additionally, it was an in-person event for the first time in three years because COVID-19 meant the Foundation was forced to hold the Gala online in 2020 and 2021.

The guests enjoyed a great variety of casino games and a robust silent action. The latter was a huge success with items and services from donors such as The Philadelphia Symphony Orchestra, Leading Edge Aviation and Bong Pil Yang, who contributed stellar artwork by Yong Hun Kim. U.S. Rep. Brian Fitzpatrick provided a Day at the Capital and others donated a collection of fine wine, their vacation home for a weekend and a wide variety of other goodies.

A focus of the evening was special recognition for President Timothy M. Block, PhD, one of the organization’s co-founders, who will transition in June from president to executive chair of the Board of Directors and begin a sabbatical at Yale University. Dr. Block was surprised and expressed appreciation for all of the attention.

“We were thrilled to have so many of our loyal supporters and staff come together to honor the great people who have made major contributions to the fight against hepatitis B,” Jean Holmes, vice president of institutional advancement, said. “We owe a huge thank you to everyone who came, participated in the silent auction, donated, and shared well-wishes with our distinguished guests and Dr. Block.”

Two of our region’s most-respected elected officials, Sen. Steve Santarsiero and Rep. Fitzpatrick, were invited to speak. The Congressman and Senator both spoke admiringly about the Hepatitis B Foundation, Dr. Block and his wife Joan, who co-founded the organization. 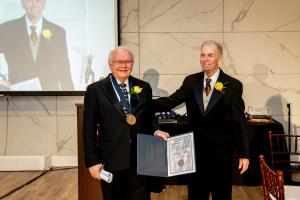 Following the celebration of Dr. Block, he turned the spotlight toward this year’s honorees, a major figure in hepatitis B research and a very well-known figure among the Foundation’s wonderfully supportive community of people living with hepatitis B. The Baruch S. Blumberg Prize for Outstanding Contributions to Hepatitis B Research was awarded to D. Lorne Tyrrell, MD, PhD. Dr. Tyrrell is currently a Distinguished University Professor in the Department of Medical Microbiology and Immunology and the University of Alberta.

The Community Commitment Award was presented to Rev. Jason Crum Escalera, a #justB Storyteller. Rev. Crum Escalera works to educate young people, particularly high school students, about prevention and delivers testimonials of his own hopes and strength. He is well known in the hepatitis B and HIV advocacy communities and strives be “a voice to the voiceless around the world.”

About Hepatitis B:  The most common serious liver infection in the world, it is caused by the hepatitis B virus, which attacks and injures the liver. Each year up to 1 million people die from hepatitis B worldwide, even though it is preventable and treatable. The number of adults living in the U.S. who have chronic hepatitis B infection may be as high as 2.4 million, which is nearly three times greater than the federal government’s official estimate, according to a new report by a team of public health experts, scientists and physicians. Hepatitis B is a “silent epidemic” because most people do not have symptoms when they are newly or chronically infected. Thus, they can unknowingly infect others and continue the spread of hepatitis B. For people who are chronically infected but don’t have any symptoms, their livers are still being silently damaged, which can develop into serious liver disease such as cirrhosis or liver cancer.

About the Hepatitis B Foundation: We are the nation’s leading nonprofit organization solely dedicated to finding a cure for hepatitis B and improving the quality of life for those affected worldwide through research, education and patient advocacy. Founded in 1991, the Hepatitis B Foundation is based in Doylestown, Pa., with an office in Washington, D.C. To learn more, go to www.hepb.org, read our blog at hepb.org/blog, follow us on Twitter, Instagram and Facebook (@hepbfoundation) or call us at 215-489-4900. To donate, contact Jean Holmes at 215-489-4900 or jean.holmes@hepb.org.