NEW video from Helio with Hepatitis B Foundation President Dr. Chari A. Cohen: We need to do more to attain hepatitis B elimination. <<Click here>>

Dr. Chari A. Cohen becomes President of the Hepatitis B Foundation

Founding President Dr. Timothy M. Block is now executive chair of the Hepatitis B Foundation’s Board of Directors. 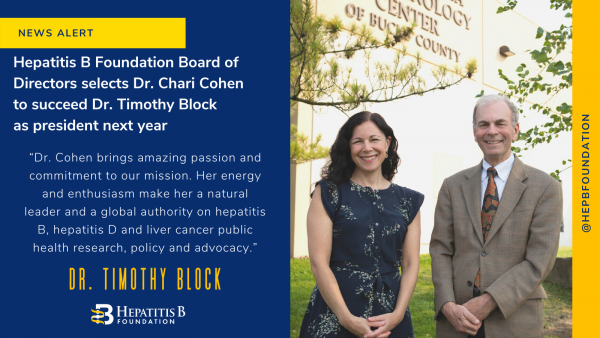 Doylestown, July 1, 2022 –  Chari A. Cohen, DrPH, MPH, today became president of the Hepatitis B Foundation, a global nonprofit organization based in Doylestown, Pa.

Timothy M. Block, PhD, founding president of the organization, is now executive chair of the Foundation's Board of Directors.

“Stepping away from the presidency of the Foundation is much easier for me knowing that Chari is my successor,” Dr. Block said. “She brings amazing passion and commitment to our mission. Her energy and enthusiasm make her a natural leader and a global authority on hepatitis B, hepatitis D and liver cancer public health research, policy and advocacy. The programs she has led and launched at the Foundation have done enormous good for our organization and the people we serve. The Hepatitis B Foundation and people affected by viral hepatitis and liver cancer will be in good hands.”

Dr. Block had been president since launching the organization in 1991 with his wife, Joan Block, and Janine and Paul Witte. He will begin a sabbatical this fall to continue his research and teach at Yale University. Louis P. Kassa, who is executive vice president and chief operating officer of the Foundation, the Pennsylvania Biotechnology Center (PABC) and the Baruch S. Blumberg Institute, is now president of the PABC and interim chief executive officer of all three entities.

Dr. Cohen, who was senior vice president, joined the Foundation in 2001 and, working with Joan Block, developed its public health, policy and advocacy program into a formidable and internationally influential operation.

“I’m honored and humbled by the opportunity to build on the legacy of Joan and Tim Block, who created this wonderful organization and brought it to global prominence,” Dr. Cohen said. “Their leadership has positioned the Foundation to continue expanding on our strengths and uniquely collaborate with patients, providers, advocates and other stakeholders to help us prepare the world for a functional cure for hepatitis B. It is a privilege to lead this team of world-changers toward the next step in our mission to bring a cure to everyone.”

Su Wang, MD, MPH, FACP, who is president of the World Hepatitis Alliance and a practicing physician and advocate for people living with hepatitis B, has worked closely with Dr. Cohen in those roles and as a member of the Foundation’s Board of Directors.

“We wouldn't be where we are in our progress towards Hepatitis B elimination if it weren't for [Dr. Cohen]” Dr. Wang said. “You seldom find someone who is both a well-respected scientist and a highly influential advocate in the policy arena. Her collaborative and innovative nature has helped make the Hepatitis B Foundation a global leader in the hepatitis space. She has a long history of recruiting and developing excellent staff, and as a team, they are leading the way with unique and robust programs for the Hepatitis B Foundation. There is no better person to take the Foundation into the future.”

Dr. Cohen earned a master’s in public health at Temple University in 2001. She received a doctorate in community health and prevention from Drexel University in 2015 and was honored with the Leadership Excellence Award and Outstanding Promise Doctoral Award.

She is the Principal Investigator of numerous private and federal grants for research and public health, including a $1.4 million, five-year grant from the U.S. Centers for Disease Control and Prevention to continue building the nationwide Hep B United coalition. She chairs the Coalition Against Hepatitis in People of African Origin (CHIPO), which she co-launched in 2004.

In 2008, Dr. Cohen led publication of the first article to document the underestimation of hepatitis B in the U.S. and offered an updated estimate in 2010, which changed the discussion around the true number of people living with HBV in our country and helped to prioritize it as an urgent public health need. Dr. Cohen has led the call for universal HBV testing and vaccination and spearheaded the first Externally Led Patient-Focused Drug Development Meeting on hepatitis B in cooperation with the U.S. Food and Drug Administration.

Dr. Cohen designed the Gateway to Care campaign in Haimen City, China, and is the architect of the Foundation’s highly successful #justB storytelling program.

She is co-chair of Hep B United, a national coalition in 22 states and 30 cities to address and eliminate hepatitis B. She is co-founder and director of Hep B United Philadelphia, a coalition and campaign to increase testing, vaccination and linkage to care in local high-risk communities. She is co-chair of Hep Free PA, sits on the steering committee of the HBV Forum for Collaborative Research and is a member of the AASLD Patient Advocacy Group.

A resident of Newtown, Pa., Dr. Cohen was chosen for the inaugural class of the Bucks County 40 Under 40 in 2012. Her husband, Paul R. Cohen, is an attorney and partner with Curtin & Heefner, a law firm with offices in Pennsylvania and New Jersey. Their daughter, Marissa, is a student at Muhlenberg College.

Other comments about Dr. Cohen

Joel Rosen, Esq., chair of the Foundation Board of Directors since 2009, said: “The expansion of the Hepatitis B Foundation’s programs and its sheer growth over the past 20 years has been amazing, and Chari Cohen has been at the heart of it all. Not only has she accomplished a great deal in her years with us, she is tremendously respected and admired by the people with whom she works. I am absolutely confident that Dr. Cohen will maintain the Foundation’s positive momentum while taking us in exciting new directions.”

John W. Ward, MD, former director of the CDC’s Division of Viral Hepatitis and now director, Coalition for Global Hepatitis Elimination, and professor, Hubert Department of Global Health, Rollins School of Public Health, Emory University: “The selection of Dr. Chari Cohen as president of the Hepatitis B Foundation is a wise choice. Dr. Cohen is deeply committed to the Hepatitis B Foundation’s mission of improving the health of persons living with and at risk for Hepatitis B. Dr. Cohen is an accomplished scientist, responsive service provider for affected patients and communities, and passionate advocate for persons with hepatitis B, leading to effective partnerships with government and business leaders. With Dr. Chari Cohen as president, the Foundation is poised for continued growth. The Coalition and I look forward to working with Chari and the Hepatitis B Foundation to meet our mutually shared goals of eliminating hepatitis B in the United States and globally.” 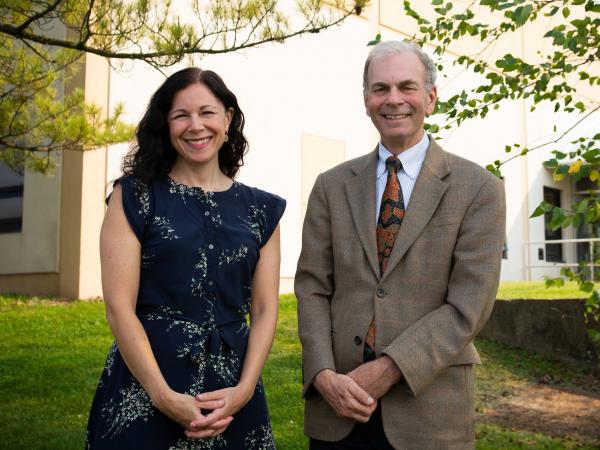