Doylestown, PA (November 2016) The Hepatitis B Foundation and AARP will co-sponsor a screening of the documentary Be About It as part of the Philadelphia Asian American Film Festival this week. Be About It is the story of two families and their battle against the potentially life-threatening hepatitis B virus, which is the leading cause of liver cancer among Asian Americans. 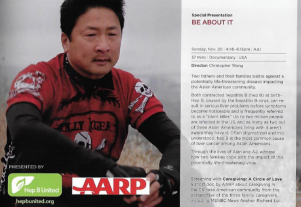 The screening is on Sunday, November 20 at 4:45 pm at the Asian Arts Initiative, 1219 Vine Street, Philadelphia. The documentary will be followed by a panel discussion featuring representatives from the Hepatitis B Foundation and its local coalition Hep B United Philadelphia, who will discuss how they are combating hepatitis B in Philadelphia and nationwide.

Hepatitis B affects 1 in 12 Asian Americans and Pacific Islanders, but most do not know that they have it. Be About It follows two men who were both infected at birth, and the impact chronic hepatitis B infection has had on them and their families. The documentary, directed by Christopher Wong and created with support from Gilead Sciences as part of their Hep B Smart program, aims to end the silence associated with hepatitis B by encouraging families to talk openly and dispel myths about living with the virus.

Hepatitis B is the most common serious liver infection in the world. An estimated 2 billion people worldwide, or 1 out of every 3, have been infected with the hepatitis B virus. Of those, more than 240 million people have become chronically infected, which means they are unable to rid their bodies of the virus. An estimated 700,000 people die each year from hepatitis B and its complications, including liver cancer.

About the Hepatitis B Foundation: The Hepatitis B Foundation is the nation’s leading nonprofit organization solely dedicated to finding a cure for hepatitis B and improving the quality of life for those affected worldwide through research, education and patient advocacy. To learn more, go to http://www.hepb.org, read our blog at http://hepb.org/blog, follow us on Twitter @HepBFoundation, find us on Facebook at www.facebook.com/hepbfoundation or call 215-489-4900.

About Hep B United Philadelphia: Hep B United Philadelphia, established by the Hepatitis B Foundation, seeks to increase the visibility of hepatitis B and liver cancer as an urgent health priority by increasing hepatitis B testing and vaccination rates, particularly among at-risk communities, and involving and mobilizing stakeholders and policy decision-makers to improve access to care for both the prevention and treatment of hepatitis B and liver cancer. To learn more, go to www.hepbunitedphiladelphia.org.