Doylestown, Nov. 22, 2021 – The Hepatitis B Foundation, a global nonprofit organization based in Doylestown, Pa., today announced that D. Lorne Tyrrell, MD, PhD, Distinguished University Professor in the Department of Medical Microbiology and Immunology and the University of Alberta, has been chosen as the recipient of its 2022 Baruch S. Blumberg Prize for outstanding contributions to advance the science and medicine of hepatitis B.

“The hepatitis B community owes a tremendous debt to Dr. Tyrrell for his pioneering work on the basic science and clinical development of new therapeutics for chronic hepatitis B,” said Hepatitis B Foundation President and Co-founder Timothy S. Block, PhD. “Most notable are some of Dr. Tyrrell’s initial studies with lamivudine and his role in the development of critical experimental systems that have become essential to developing and understanding the biology and virology of the hepatitis B virus and development of new antivirals.”

Dr. Tyrrell also played a key role in development of the KMT mouse, Dr. Block pointed out, which has been a major research asset to scientists working in hepatitis, particularly hepatitis B. 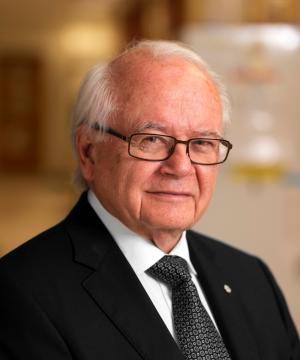 “Lorne Tyrrell pioneered the use of nucleoside analogs for the treatment of chronic hepatitis B infection,” said Francis V. Chisari, M.D. Professor Emeritus, Scripps Research Institute, and 2007 recipient of the Blumberg Prize. “His work led to the development of lamivudine, which he showed was safe and dramatically effective in chronic hepatitis B infected chimpanzees and, ultimately, in human clinical trials. We can thank Professor Tyrrell for spearheading the conception, development and clinical application of the first orally administered antiviral drug against hepatitis B that suppresses viral replication, reduces the risk of developing cirrhosis and hepatocellular carcinoma, and has saved the lives of countless patients over the past several decades.”

Dr. Tyrrell is the founding director of the Li Ka Shing Institute of Virology at the University of Alberta.

He has focused his research on viral hepatitis for more than 30 years. His efforts to develop an antiviral therapy for chronic hepatitis B, which was supported by the Canadian Institutes of Health Research and Glaxo Canada, led to the licensing of lamivudine, first oral antiviral agent to treat hepatitis B, in 1998.

In a fascinating coincidence that impacted Dr. Tyrrell’s career, he was a post-doctoral researcher at the Karolinska Institute in Stockholm in 1976 when Dr. Blumberg was awarded the Nobel Prize. Not only did Dr. Tyrrell listen in-person to the Nobel lecture by Dr. Blumberg, he was able to attend the Nobel Prize award ceremony. That sparked his long-time research focus on hepatitis, particularly hepatitis B.

“For that reason, the Blumberg Prize has always been special in my view, so this is a tremendous honor and I’m extremely pleased and proud and humbled,” Dr. Tyrrell said, adding, “I’ve always had a great admiration for Joan and Tim Block, and what they have done for people around the world who are living with hepatitis B.”

Joan Block, RN, BSN, co-founded the Hepatitis B Foundation, along with her husband and Janine and Paul Witte, 30 years ago. She served as its executive director until retiring in 2017.

Dean of the Faculty of Medicine and Dentistry at the University of Alberta from 1994 to 2004, Dr. Tyrrell has received numerous prestigious awards such as an Officer of the Order of Canada, the Gold Medal of the Canadian Liver Foundation (2000), Fellow of the Royal Society (2004) and the EnCana Principal Award, Manning Innovation Awards (2005). He was inducted into the Canadian Medical Hall of Fame in April 2011 and received the Killam Prize in Health Sciences in May 2015.

Currently, Dr. Tyrrell serves on the COVID-19 Vaccine Task Force advising the Canadian government on the selection of COVID-19 vaccines based on efficacy, safety and timely availability for Canada.

About Hepatitis B: Hepatitis B is the most common serious liver infection in the world. It is caused by the hepatitis B virus that attacks and injures the liver. Each year up to 1 million people die from hepatitis B worldwide, even though it is preventable and treatable. Hepatitis B is a “silent epidemic” because most people do not have symptoms when they are newly or chronically infected. Thus, they can unknowingly infect others and continue the spread of hepatitis B. For people who are chronically infected but don’t have any symptoms, their livers are still being silently damaged, which can develop into serious liver disease such as cirrhosis or liver cancer.

About the Hepatitis B Foundation: We are the nation’s leading nonprofit organization solely dedicated to finding a cure for hepatitis B and improving the quality of life for those affected worldwide through research, education and patient advocacy. Founded in 1991, the Hepatitis B Foundation is based in Doylestown, Pa., with an office in Washington, D.C. To learn more, go to www.hepb.org and www.hepb30years.org, read our blog at hepb.org/blog, follow us on Twitter, Instagram and Facebook (@hepbfoundation) or call us at 215-489-4900. To donate, contact Jean Holmes at 215-489-4900 or jean.holmes@hepb.org.